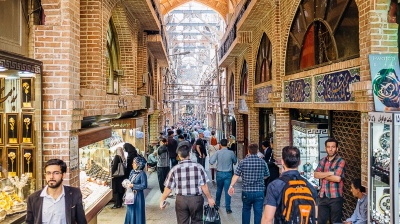 Tehran and 91 other cities and towns in Iran have been forced to close due to new Delta variant wreaking havoc on medical system.
By bne IntelliNews July 5, 2021

Tehran and several other cities across Iran have been told to close non-essential businesses and services in a bid to deal with the latest so-called fifth wave of coronavirus (COVID-19), Donyaye e-Eqtesad newspaper reported on July 5.

Businesses such as cafes and restaurants as well as shopping centres including the Tehran Grand Bazaar have been ordered to pull the shutters down for at least two weeks as the numbers of coronavirus infections continues to jump following the discovery of the Delta variant originally discovered in India.

Tehran and 91 other cities and towns in the country are now on so-called “red alert”, while 183 others have been placed in the “amber” category, Iranian Health Ministry announced on July 4.

“Given the highly infectious nature of this new [variant of corona] virus, it can further raise cases and hospitalisations,” Alireza Raisi, spokesman for the National Coronavirus Headquarters announced.

As part of the national shutdown, so 70% of government offices have been forced to close to slow the spread, with only a skeleton staff now operating much of the state’s burdensome bureaucracy.

In addition to the shutdowns in business, seminaries and education, intercity travel has been restricted by police with check points again placed on the entrance to different areas.

Tehran is particularly badly hit by the new variant with a 31% increase in the number of hospitalisations, and a 41% increase in mortalities w/w.

The massive upswing in infections is partly due to the poor rollout of vaccines in the country and large increase in black market sales forcing many to have to go without any protection from the virus.

In recent weeks, thousands of Iranians have flown and bussed themselves to Armenia, where upon the government is offering free vaccinations on entry to the country as part of their efforts to tackle the virus.

Iran’s Health Ministry Spokesperson and Food and Drug Administration director, Kianoush Jahanpour, said on July 4 that several countries in the region do not welcome hordes of Iranians turning up for vaccinations, naming Armenia in his daily update on the state of coronavirus in the country.

He denied reports that Armenia was distributing out-of-date AstraZeneca vaccines to Iranian tourists, saying that Armenians did not trust the vaccines and that Iran was making use of them instead.