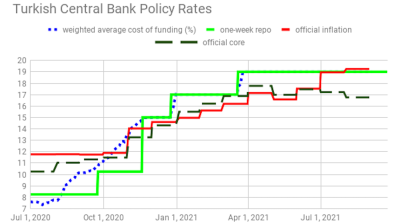 Turkey’s policy rates chart is getting ballsed up once again. We’re now told we’ve missed a turning in the legendary “corridor”. By the way, the decoupling between official inflation and “core” inflation began as early as July. Those who claim Turkish officials do their job haphazardly should be blu
By Akin Nazli September 12, 2021

Turkey’s latest central bank governor—now moving into ‘respectable innings’ territory as he’s been in the post since March—on September 8 attended a “meeting on the economy” at the German-Turkish Chamber of Trade and Industry in Ankara. The central bank head—seen with the real central bank head in the newspaper clipping below—delivered a “speech” reading from a prepared text. He also threw in some PowerPoint slides.

The governor informed his audience about latest developments in the global economy, and then turned to developments in the Turkish economy. Moving on, he devoted the second part of his speech to enlightening meeting attendees about the global decoupling of the CPI (consumer) and PPI (producer) inflation indices. Apparently, as a result, monetary policy makers are shifting their focus to “core” inflation.

It was something, he inferred, that should be given all due consideration—and then he let the cat out of the bag: “As there is the same case at other central banks, I would like to share with you that we have some analysis on the temporariness of the price movements that have emerged due to supply and demand shocks brought about by the pandemic… in the coming period, somewhat higher attention will be paid to eliminating the effects created by supply shocks.”

The touchpaper was lit and the lira—a snoozing giant sleeping off some of its ills of late—woke up with a sneeze. The USD/TRY pair, which has recently moved within the 8.20s-8.30s range, was quickly back in the 8.50s. The all-time weak rate remained some way off—namely, the 8.8061 registered on June 25—but it was no time for false comfort.

The synthetic levels in the pair are fuelling anomalies again. When the USD/TRY made it into the 8.20s just recently, FX-linked deposits at Turkish banks returned to their habit of breaking consecutive records.

If Turkish officials talk of “core inflation,” they refer to the Turkish Statistical Institute’s (TUIK’s) “C” series, which excludes energy, food, drinks and tobacco. If they exclude a few more items, they could actually solve the inflation problem permanently.

Even if the central bank governor had made his “core inflation” talk a fireside chat, the markets would still have taken fright. Haluk Burumcekci of Burumcekci Consulting didn’t hang about. He quickly updated his policy rate expectations. Burumcekci now sees a rate cut on the cards at the next rate-setting meeting, scheduled for September 23. Or failing that, in his alternative estimation, the “core inflation” talking point will enter the central bank text on September 23, with a rate cut to follow on October 21.

When it comes to the course of official inflation (standing at 19.25% compared to the 40-50% that your shrewd academic or a Turk weeping over their gas and groceries bills will refer to), on August 3, Burumcekci said: “Even without a loss in lira value [from the 8.25-8.65 band seen in the USD/TRY pair since July], inflation may rise to 19-20% in the next three months [August, September, October], with a fall coming only in the final two months [November, December] to end the year at 17-18% at best. If the value-added tax discount due to end in September was not extended, this could exert an upward impact of around 1 percentage point.”

The official inflation data for September will be released on October 4.

The market remains positive for limited 50bp cuts at the last two monetary policy meetings of 2021, set for November 18 and December 16.

Also note, the official inflation numbers for November will be released on December 3.

On September 9, the government released its updated medium-term programme and hiked its expectation for an end-2021 official inflation release of 16.2%. (The expectation for the 2021 official GDP growth release was also hiked, moving it up to 9%. We have been noting that this ‘public auction’ will see double digits by March 2022 when the figure is set to be published.)

The government’s new medium-term economic programme implies that it expects the average USD/TRY rate (the central bank’s official buying rate) to stand at 8.30 in 2021.

Meanwhile, the global money printing business is getting totally out of hand. There is talk of the beginning of tapering in Q4 but whether the Fed will ever manage to grasp the nettle is questionable. Nevertheless, tapering turbulence in global markets in November, just prior to the traditional new year rally, could result in the USD/TRY crashing through new records that will leave the lira looking lousier than ever.

On September 10, Erdogan declared war against “highway robberies on shelves, at stalls and on price labels”. He will wage war against booming costs and opportunists.

Raids on warehouses and retailers are on the way…

On September 9, Middle East Eye reported that Turkish staff members of Agence France-Presse (AFP) have decided to go on strike next month if the news agency does not raise their salaries in accordance with Turkey's actual inflation rate, i.e. the one they talk about on the street, not the weird figure seen in the central bank governor’s presentations.

Of late, the market has, interestingly, been going easy on Ankara’s monetary policy.

During September 19-22, Erdogan will take to the field in New York to attend the UN General Assembly. His goons may kick some protestors around and our man will also open the new Turkish House “at the heart of Manhattan,” just across from the UN building. There’s no need to mention this, with Erdogan you know it already: it is among the tallest buildings in the neighbourhood.

The yankees and their proxies are, meanwhile, talking about how Erdogan’s new bestie in America, Joe Biden, has been feigning a reluctance for trysting with Erdogan. The Biden administration may be made up of an experienced team and Biden himself has known Erdogan for a long time, but they have sold Erdogan too short.

Perhaps, it’s the case because Erdogan is barely staying afloat. But, as the Turks say, “even his dead body would be enough” to play the decadent hegemons like a fiddle.

Biden has gotten into bed with Erdogan in the Afghanistan business and we should look out for Biden’s shining 32 teeth by Erdogan’s side again in New York, following their Brussels meet-up in June.

Joe Biden truly has terrifically bright teeth and he is not ungenerous in exhibiting all 32 of them. He hangs around as a dentist ad viral.

Biden and his flamboyant 32 teeth did the business with Vladimir Putin in Switzerland in June.

As of September 5, a Turkish civilian technical team was working at Kabul airport while talks with the Taliban about how to guarantee their and the airport's safety went on. Turkey has reportedly deployed some security measures in neighbouring state to Afghanistan, Pakistan, putting in special forces and equipment to use in case of an emergency in Kabul.

That means that in the event of an attack on the airport Turkey could end up in a shooting match in Afghanistan at any moment, leading to who knows what level of scale-up. Might the Afghanistan conflict end up creating some dramatic consequences for Turkey, a nation that has been living through the outcomes of the Syria war for a decade? It would only be positive for the Erdogan regime and the lira.

Turkey's official inflation weakens for first time in year and a half, dips to 84%