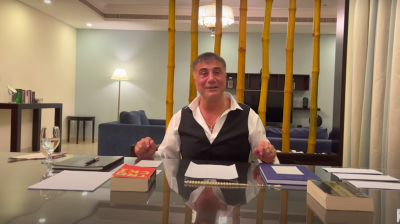 Sedat Peker must have had plenty of late nights, but he’s a diehard baby face.
By Akin Nazli May 14, 2021

Sedat Peker, a mafia boss known in Turkey as “The Botox Chief” or “The Botox”, has of late become a must-watch Youtuber. All Turks except the Erdogan media have been talking about his video series throughout May.

Peker has in fact had a YouTube channel for seven years. But last week, his viewer stats crossed the 3mn per video threshold. He has released four videos so far and he says he will release more.

President Recep Tayyip Erdogan has also made use of The Botox (“Erdogan gets his Peker out in war of words with Turkish academics”, bne IntelliNews Pro, January 14, 2016), and The Botox is currently talking about the shadowy ‘state within a state’ Pelicans group, police chief-turned-politician-turned-convicted criminal Mehmet Agar and Interior Minister Suleyman Soylu.

Peker has not said anything new yet. All the crimes he has referred to are well-known to the public. However, as The Botox was a participant in the crimes in question, they are open confessions and are adding to the current weakness of the Erdogan regime.

Perhaps, we need to stop here to take stock of a few observations on the development of the modern Turkish mafia since we will encounter many names in the coming days and it could get a little vexing for those who have never heard of them before.

Conflicts among gangs start to surface

The reason for wasting time on this matter is that Turkey’s collapse, which stretches back across the past decade, has reached an extreme point. Conflicts among the gangs that work off the regime are starting to surface.

Not too long from now, the new depths of Turkey’s collapse will make big headlines and assessing contemporary goings-on via the lens of The Botox case may help to understand the country's plight.

What we have here is also the sexiest side of the murkiness that has proliferated under the Erdogan regime. There is abundant cocaine, money, guns, polemics, marinas, yachts, hotels, villas, homicides… you name it.

It is not the first time that Turkey has reached this point and, under normal circumstances, an early election would clean up all the mess. Erdogan’s current “crutch”, Nationalist Movement Party (MHP) head and junior coalition partner Devlet Bahceli, would raise the flag for a snap poll. But what we have right now, with a president fixated on hanging on, are not normal circumstances.

Roots of the modern mafia

Let’s go back quite some way to help work out where we are. It is thought that the roots of the modern mafia, a rotten fruit of all modern nation states, in Turkey date back to the “Occupation of Constantinople”, which lasted from November 13, 1918 to October 4, 1923. During this period, the Special Organization (Teskilat-i Mahsusa), the intelligence unit of the Committee of the Union and Progress (Ittihat ve Terakki Cemiyeti/CUP), organised old-style gangsters, known as Kulhanbeyi, along with all other criminals against the occupying forces (British, French, Italian and Greek).

The CUP was a coalition of Turkists and Islamists. It grabbed the government of the Ottoman State and absorbed or eliminated all the other ideologies, which were also looking for a solution to the Ottoman collapse.

Having entered World War I under the control of Germany, the CUP was seen as responsible for the official end of the Ottoman Empire. However, a fresh generation of younger CUP members organised a reaction from Anatolia against the occupation and they, led by Mustafa Kemal Pasha (Ataturk), founded the Republic of Turkey.

Some of this might sound straightforward, but these are all controversial affairs. For instance, each argument, such as on what was the true ideology of the CUP or what really happened with the purging of the Islamists at the very beginning of the era of the republic, has its own set of literature and tonnes of debates that have never been resolved.

From the CUP to The Botox

Our aim here is not to involve ourselves in these discussions but simply to track the contours that connect the CUP gangs that targeted the occupation forces to The Botox.

For fans of gangster stories, Ryan Gingeras has a book entitled “Heroin, Organized Crime, and the making of Modern Turkey”.

By the end of the 1930s, Turkey was operating official heroin factories. Cengiz Erdinc has a book entitled “Overdose Turkey”.

Turkey remains a major heroin route, but it stopped heroin production towards the end of the 1970s due to the so-called opium crisis with the US.

The period between 1920 and 1946 can be considered a parenthesis within the centuries-long collapse of the Ottoman Empire.

In 1947, Turkey accepted the US mandate with the Truman Doctrine. Since then, Turkey has been on good behaviour when the US has awarded it money and on bad behaviour when it has not.

In 1952, Turkey became a member of Nato. And, funnily enough, it was after the country joined Nato that military coups became commonplace in Turkey.

Following the 1971 coup, intellectuals, who were tortured at the infamous Ziverbey Villa, claimed that those doing the torturing introduced themselves as “counter-guerrilla”. It was then that Turkey got to hear of something called “counter-guerrilla” for the first time.

The 1970s, hardcore years of the Cold War, brought the rise of the MHP gangsters, the current prevailing form of the Turkish mafia.

In 1980, the coup of all coups arrived, bringing with it a full-blown ethical collapse in Turkish society. Another gift was the Kurdistan Workers Party (PKK), which gained ground thanks to the heavy torture that Kurds experienced in the notorious Diyarbakir Prison.

And then we had the 1990s; Turkey endures a full-blown collapse in all fields, bringing bloodbaths.

There are details, details and more details. However, as we have reached The Botox, let’s leave it there for now and watch out for what comes next.

To be continued (for it never ends …).