ISTANBUL BLOG: The Erdogan administration and Turkish “businessmen” – plot thickens as US seeks extradition of ‘SBK’ 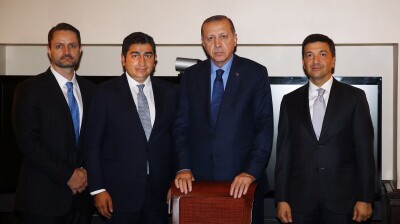 Sezgin Baran Korkmaz, a Turkish “businessman” known as SBK, was on June 19 arrested by police in Austria at the request of the US, according to a press statement from the US Department of Justice released on June 22.

An April 28 superseding indictment made by a federal grand jury in Utah charged SBK, owner of SBK Holding, with one count of conspiring to commit money laundering, 10 counts of wire fraud and one count of obstruction of an official proceeding.

According to the indictment, also released publicly on June 22, SBK laundered over $133mn in fraud proceeds through bank accounts that he controlled in Turkey and Luxembourg.

SBK, left, seen with Turkish President Recep Tayyip Erdogan. Behind them is Erdogan's son-in-law Berat Albayrak who served as finance minister until stepping down last November.

A report by Turkey’s Financial Crimes Investigation Board (MASAK) states that the laundered amount is higher.

The proceeds allegedly relate to a scheme run by Jacob Kingston and Isaiah Kingston, known as the Kingston brothers, and Levon Termendzhyan (or Lev Aslan Dermen, as he also has a Turkish passport) to defraud the US Treasury by filing false claims for over $1bn in refundable renewable fuel tax credits for the production and sale of biodiesel by their company, Washakie Renewable Energy LLC, in Utah.

The Kingston brothers were arrested in the US in 2017 while they were allegedly absconding to Turkey. They confessed their crimes but Termendzhyan has not made any confession.

SBK and his co-conspirators allegedly used proceeds from the fraud to acquire Turkish low-cost carrier Borajet, hotels in Turkey and Switzerland, a yacht named the Queen Anne and a villa and apartment on the Bosporus strait in Istanbul.

A further allegation is that SBK devised a scheme to defraud the Kingston brothers by “falsely” representing that he could provide them with protection, via “unnamed” government officials, from the US investigation.

Voice of America calculated the overall maximum penalty that SBK faces as 225 years in prison.

Back on May 28, bne IntelliNews reported on some additional characters that have come into focus, or back into focus, as a result of Turkey’s ongoing Sedat Peker scandal, in which fugitive organised crime boss Peker has been posting streams of allegations on YouTube on connections and alleged crimes involving top Erdogan administration officials and Mafiosi. With the emergence of the SBK case, we now have another four new characters entering the story. Everyone in this story is connected to each other.

It is notable that SBK, who has lately been releasing voice records of people whom it is claimed he bribed in Turkey, has now been directly silenced by the US while the United Arab Emirates (UAE), where Peker is said to be in self-exile, is not currently allowing Peker to post videos.

After meeting with US President Joe Biden on June 14 on the sidelines of a Brussels Nato meeting, life has become that much easier for Turkish President Recep Tayyip Erdogan. He is currently busy attacking Turkey’s main pro-Kurdish party HDP, which the Constitutional Court has said must stand trial on claims of links to Kurdish PKK terrorists.

SBK is a well-known figure in Turkey, while Turkish media have recently been working on identifying his “journalists”.

In November 2019, bne IntelliNews carried the story of a Turkish ‘Robin Hood’ at work in poor neighbourhoods of Istanbul amide Turkey’s economic turmoil. Local news agency Demiroren and the Guardian have also reported on SBK’s ‘Robin Hood’ adventures. A question here is did anyone receive money for ‘PR’ in spreading coverage of the occurrences.

As regards connections between SBK and another Turkish “businessman” Ekim Alptekin, SBK was present in the indictment brought in a case against ex-US president Donald Trump’s national security adviser Michael Flynn, who was hired as a lobbyist for Turkish interests.

In August 2018, the US judiciary released the first indictment against the Kingston brothers.

In January 2019, the US Department of Justice made an application to the Turkish justice ministry as regards the Kingston brothers case.

In September 2020, SBK Holding bought Sicolux, which controls a 42% stake in Turkey’s Kiraca Holding, for $82mn.

Peker claims that SBK visited Interior Minister Suleyman Soylu at his office on December 4, one day before he departed Turkey.

On January 7, “journalist” Veyis Ates, who has been working with Soylu for longer than a decade since Soylu’s Democrat Party (DP) days, allegedly asked SBK for a bribe of €10mn during a phone conversation. The evidence is said to be in a recording released on June 20 by the Workers’ Party of Turkey (TIP) MP and investigative journalist Ahmet Sik.

It is not clear on whose behalf Ates was negotiating with SBK, according to bianet.

In Bodrum, on Turkey’s Aegean coast, there is a luxury hotel, the Paramount. All the gangsters who feature in the circles described have stayed there. It is claimed that none of them have paid money to do so.

The name of the hotel, and its owner, are subject to constant change.

On May 21, Gazete Duvar reported that the hotel is currently in the ownership of a “dummy company” in Singapore.