ISTANBUL BLOG: The tragedy of Adem Yarici and the “perception operatives” 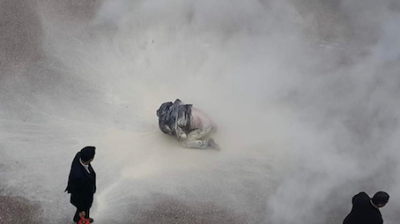 Security officers intervened with fire extinguishers. Adem Yarici was later reported to have died of a heart attack.
By Akin Nazli February 10, 2020

An unemployed Turkish father, Adem Yarici, on February 7 died after setting himself on fire in Turkey’s southern city of Hatay in front of the provincial governor’s office, soL International has reported.

Security officers intervened with fire extinguishers. Yarici was taken to hospital but then apparently died of a heart attack while he was being transferred to another hospital in the city of Mersin.

The Hatay governor’s office put out a statement claiming that “Yarici has previously attempted to burn himself because of his psychological disorders”.

Turkey takes a neoliberal approach to psychiatry. Businesses are allowed to throw huge quantities of drugs at the problem. Following this latest tragedy amid the country’s economic turmoil, black humourists remarked that the anti-depressants provided by the Turkish health system should have helped Yarici with his hunger problem. There’s absolutely no scarcity of anti-depressants in President Recep Tayyip Erdogan’s Turkey. According to the latest data from the health ministry, 308mn boxes of such drugs—around three to four boxes per capita—were sold in Turkey in 2018.

Not surprisingly, suicides attributed to economic despair in Turkey are not at all uncommon in these boom-to-gloom days.

After three families in quick succession committed collective suicide with cyanide last November, Erdogan’s officials implemented a ban on the easy availability of the poisonous compound.

And those “perception operatives” are everywhere. Praise be that we have the daily Sabah, directed by Serhat Albayrak—brother of Erdogan’s minister of finance and son-in-law Berat Albayrak—which is consistently on their case. It is Sabah that has revealed inconsistencies in Yarici’s suspicious attempt to burn himself to death. February 8 saw the newspaper publish Yarici’s personal health documents as part of a story headlined “They’ve rushed into a perception operation! See what the reality was…”

Universal patient rights are in force in states of law, but not in banana republics.

Brazen faces
Sabah’s ‘name by name’ revelation of social support provided to Yarici, his ex-wife and two kids was another blow struck to the brazen faces of the “perception operatives”, including the dailies Birgun and Sozcu, two of the last few titles in Turkey that can actually publish news.

The monthly income of the Yarici family roughly stood at around TRY500.

According to ‘company’ or ‘yellow’ union Turk-Is, the minimum monthly expenditure on food of a worker stood at TRY609.71 in January, while the hunger threshold for a four-person family stood at TRY2,219.

Individual suicides, suicidal people who make it on to the roof of the Turkish parliament, people who do not die after setting themselves alight and unpaid construction workers plunging from cranes are such common occurrences in Turkey that they no longer carry any news value. But there are always those pesky “perception operatives” out there attempting to connect these things with economic problems. In Sabah we trust.