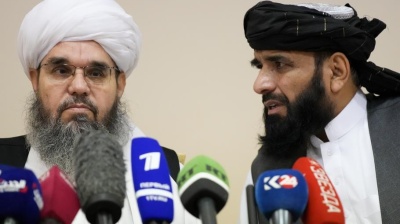 A Taliban delegation travelled to Moscow to hold talks with the Kremlin, which is concerned that fighting in Afghanistan will spill over into Central Asia and destabilise the region. / WIKI
By Ben Aris in Berlin July 12, 2021

A delegation of top Taliban fighters travelled to Moscow on July 9 for talks with the Kremlin and said it already controls most of Afghanistan.

"We came [to Moscow] to talk about the current situation in Afghanistan with the Russian side, and also to assure them that we are committed that we will not allow anyone to use the soil of Afghanistan against Russia, the neighbouring countries and other countries," Taliban representative Mohammad Sohail Shaheen told Russian news agency TASS.

With the US moving to complete its pullout from its longest war ever, Afghanistan has rapidly descended into chaos with the Taliban sweeping through the northern regions, forcing an estimated 2,300 government troops to flee across the border to Tajikistan, according to Afghan National Security Adviser Hamdullah Mohib, as cited by RFE/RL.

Moscow, Tashkent and Dushanbe are afraid that the fighting in the country will spill over the border and destabilise the whole of Central Asia. Frantic telephone diplomacy has been going on for a week and culminated in the Taliban visit to Moscow at the end of last week to reassure Russia that the situation would not spiral out-of-control.

Russia has a military base in Tajikistan and has already promised to send troops to secure the long northern border between Afghanistan and Tajikistan. Moscow is concerned that the Taliban will reform ties with ISIS and also promote drug trafficking, its traditional source of money.

Fighting broke out two weeks before the Americans left, but rapidly escalated last week. According to reports, at least seven of 14 northern regions have fallen to Taliban forces, with reports coming in via social media of other cities in the north being surrounded and under attack. Local residents in many citizens have taken up arms against the Taliban and the country is on the verge of a full blown civil war.

The Taliban delegation in Moscow reassured the Kremlin that the fighting is already over and claimed to now control 85% of the country.

Local officials in Badakhshan told Radio Azadi that 26 of the 28 districts in the northern province have fallen to the Taliban advance. Tajik officials have said the Taliban now controls 900km of the 1,357-kilometer border with Tajikistan.

RFE/RL reports that the Taliban controls more than half of Afghanistan's 398 districts - most of those falling since US and other international forces began their withdrawal from the war-torn country on May 1.

The delegation also reassured Moscow that it would not tie up with terrorist organisations like ISIS, would clamp down on opium production and would not allow fighting to spill over the border into neighbouring Central Asian countries, of which Tajikistan and Uzbekistan are the most exposed.

“It may be that the Taliban have neither reason not ambition to go beyond #Afghanistan borders. Yet, their reps’ promises - like now in Moscow - to stay put, stay off drugs & fight ISIS - shouldn’t be taken for granted. Taliban mustn’t be ignored, but it can’t be trusted,” Dmitri Trenin, director of the Carnegie Moscow Center, said in a tweet.

The US-backed Afghan government has been unable to respond to the Taliban onslaught. It is riven by rivalries and does not enjoy broad-based popular support.

President Ashraf Ghani's forces are now concentrated in the capital. US military policy advisors have suggested that the US continue to support the embattled government with money and arms and that the government take a pragmatic approach of withdrawing from more exposed towns and abandoned regions they cannot hold.

The Taliban sought to reassure Moscow, the biggest military power in the region. Russia has suffered repeatedly at the hands of Islamic extremist terrorists who in the 90s attacked the Russian capital and other towns, including a school in Beslan. While most of those attacks were by Chechen separatists, the terror cells in the more subdued Chechnya are informed, inspired and aided by other Islamic extremist groups that sent fighters to the region during its two wars with Moscow.

"We will take all measures so that Islamic State will not operate on Afghan territory... and our territory will never be used against our neighbours," Taliban official Shahabuddin Delawar said through a translator in Moscow.

The same delegation said a day earlier that the group would not attack the Tajik-Afghan border, the fate of which is in focus in Russia and Central Asia. The Taliban delegation said it controls two thirds of the Tajik border, a claim backed up by the Russian Foreign Ministry.

It also said Afghan districts along the border with Uzbekistan and Turkmenistan have also fallen to the militants, reported RFE/RL, raising concerns in Moscow about instability in a region it considers its backyard.

On July 8, the Taliban captured Afghanistan's main border crossing with Iran in the latest advance amid a series of attacks on government-controlled districts by the militia group, which has become emboldened as the result of the foreign forces' withdrawal.

Iranian Foreign Ministry spokesman Saeed Khatibzadeh said Iran's border with Afghanistan was "peaceful and secure, thanks to our diligent border guards, and there is no insecurity at our country's frontier with Afghanistan," as cited by RFE/RL. But Khatibzadeh did not refer directly to the Taliban claim that it had captured Islam Qala.

Russia's foreign ministry has called on all sides of the Afghanistan conflict to show restraint and said that Russia and the Moscow-led Collective Security Treat Organisation (CSTO) military bloc would “act decisively” to prevent aggression on the Tajik border if necessary, RIA reported. The CSTO leadership is due to meet in the coming week and Russian foreign minister Sergey Lavrov is slated to attend.

The Taliban delegation told the same news conference that the group would respect the rights of ethnic minorities and all Afghan citizens should have the right to a decent education in the framework of Islamic law and Afghan traditions.

"We want all representatives of Afghan society ... to take part in creating an Afghan state," said Delawar.

However, observers fear a crackdown by the Taliban should they take control of the country again. Last month the Sayed ul-Shuhada girls school in Kabul was bombed, killing 85 people, mostly schoolgirls. The Taliban have been against educating women in the past.

Russia would not take any measures while the aggravation of the situation in Afghanistan does not influence events on the territory of Moscow’s allies, Lavrov said at a press conference on July 9.

"As for the continued military action in the absence of the political process, then the events on Afghanistan’s territory concern us exclusively from the point of view of a possible spillover of troubles onto the territory of our allies," Lavrov said. "The fact that the Talibs have occupied border posts on the border with Iran, on the border with Tajikistan… while this is happening on Afghanistan’s territory, we’re not going to undertake any measures except for our insistent calls for the political process, which all Afghans have said they support, to happen as soon as possible," he added.

The Taliban also sent a delegation to Tehran on the matter of finding a political solution to end the fighting.

Taliban spokesman Mohammad Naeem tweeted on July 8 that the two sides agreed in a joint declaration that they had come to a common understanding of the dangers of continuing the war and the damage it would do to the country.

“Both sides agreed that war is not the solution to Afghanistan's problems, and that all efforts must be directed towards a political and peaceful solution,” he said as cited by RFE/RL, adding that another meeting will take place “in the near future” to discuss issues such as “the mechanism for the transition from war to lasting peace.”

“War is not the solution to the Afghan problem and all efforts to reach a political and peaceful solution must be justified,” he added.