Kremlin turns down Zelenskiy offer of a Donbas summit with Putin 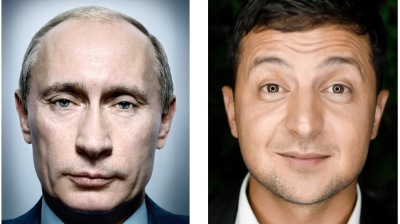 Over the last month Zelenskiy has been on a diplomatic campaign to break the stalemate in the Donbas peace talks. He offered to meet Putin for one-on-one talks, but has been rebuffed.
By Ben Aris in Berlin April 29, 2021

The Kremlin has rebuffed Ukrainian President Volodymyr Zelenskiy's offer to meet his counterpart Russian President Vladimir Putin in a one-on-one summit on the Donbas.

Zelenskiy said on April 27 that he was willing to meet with Putin face to face to try to restart the stalled peace process.

He also called for a new agreement to be drawn up to end the fight that would replace the current Minsk II agreement.

Over the last month Zelenskiy has been on a diplomatic campaign to break the stalemate in the negotiations to bring an end to the undeclared war between the two countries and at the same time shore up his flagging popularity ratings at home that have recovered somewhat as a result of these efforts.

The Kremlin was cool on the idea of a meeting.

"The chances such a meeting may take place are very slim, because in the final count it is the meeting’s content, and not the very instance of such an event, that is really important. For the time being the presidents propose conflicting agendas,” the deputy director of the Institute of CIS Countries, Vladimir Zharikhin, told TASS. “Zelenskiy said he wished to discuss an agreement on peace in Donbas, but Putin replied quite reasonably that negotiations with the Donetsk and Lugansk leaders must be conducted first. Russia in this case is a third party, and not a participant."

While Moscow is widely seen to be behind the fighting in the Donbas and backing the rebels militarily, formally the Minsk II agreement is between the leaders of the separatist rebels and the Ukrainian government. Russia, Germany and France were the guarantors of the agreement. Russia has not formally been accused of participating in the fighting and technically remains a third party to the conflict.

It is partly for this, and other reasons, Zelenskiy would like to negotiate a fresh agreement to end the fighting.

Russian Foreign Minister Sergei Lavrov issued an emphatic warning that Russia would not entertain any talks on a new Minsk agreement and insisted that the current agreement must stay in place.

The 2015 deal, which was brokered by France and Germany, was a diplomatic coup for Russia, which forced Kyiv to offer broad autonomy to the separatist regions and amnesty for the rebels.

Amongst several unpalatable conditions were new laws and a change to Ukraine’s constitution to grant the rebel region more autonomy. The most galling condition is that control of the border between Russia and Ukraine would only be returned at the very end of the process, rather than at the very beginning, which many in Kyiv demand. The deal is widely resented by many Ukrainians, who consider it a betrayal of national interests. Actually implementing many of the conditions would be political damaging and so former president Petro Poroshenko who signed for the Ukrainian side stalled and the deal missed its 2018 deadline for completion and has been frozen ever since.

One of the changes proposed by Zelenskiy is to reverse the order of actions in the Minsk deal and put control of the borders at the top of the agenda, not at the bottom. Lavrov, speaking during a TV interview, rejected the idea out of hand.

“Control of the border is the very last move that comes only after those territories get a special status fixed in the Ukrainian Constitution and hold free elections acknowledged as such by the Organization for Security and Cooperation in Europe [OSCE],” the Russian minister said as cited by AP. “I believe that we mustn’t let Mr. Zelenskiy and his team get off the hook, even though they are trying hard to wriggle out.”

Putin is sticking to the fiction that Russia is a disinterested bystander and said last week that Zelenskiy needs to first come to an agreement with the rebel leaders. He added that if the Ukrainian president wants to discuss the normalisation of ties with Russia, he’s welcome to come to Moscow.