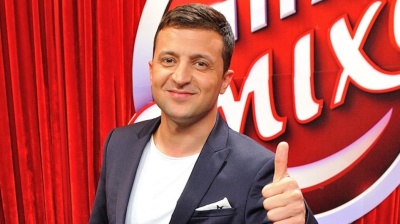 It’s what you would expect from a professional stand-up comedian: Ukraine’s president-elect Volodymyr Zelenskiy roasted Russian President Vladimir Putin’s offer to grant Russian passports to any Ukrainians that wants one with a mixture of satire and scorn that was at the same time funny and poignant.

Zelenskiy countered Putin’s offer by offering all Russians a Ukrainian passport so they could leave a repressive Russia for the “freedom” of Ukraine. And he has a point.

Only a week since the won the election in a landslide, and the Kremlin has been testing Zelenskiy, who has come through his first clash with Putin with flying colours. Some observers were hoping that Putin would take the opportunity of a new, presumably more sympathetic, president in Ukraine as a chance to begin walking the tensions back and start the search for a compromise to end the conflict between the two countries.

But Zelenskiy’s honeymoon period was over after only three days (although he won’t officially take over as president until the inauguration, slated for June 3) after Putin signed a decree to make it easier for occupants of the war-torn Donbas region to obtain a Russian passport.

Separately the Kremlin has been turning the screws on Kyiv with a ban on oil and coal exports to Ukraine. Despite the de facto state of war between the two countries Ukraine still imports 80% of its coal, needed to fire power stations, from Russia.

Issuing passports to locals in a region in a foreign country is a particularly aggressive move as it changes the legal status of the passport holder under Russian law. While the vast majority of residents of eastern Ukraine are ethnic Russians, they remain Ukrainian citizens. However, if they hold a Russian passport the Russian constitution obliges the Kremlin to “protect” its citizens’ interests. The same tactic was used in the run-up to the annexation of the former Georgian regions of South Ossetia and Abkhazia. Passports become a legal precedent for Russian military intervention.

If Russia annexes Donbas that would be a game-changer and even the threat of annexation significantly increases the tensions between Russia and Ukraine – and by extension Russia and the West. Moreover, Putin’s aggressive moves remove all the leeway Zelenskiy had to “reboot” the peace process as he promised during the election campaign.

Zelenskiy lampooned Putin’s passport decree with a cutting reply, and significantly undermined fears that his lack of experience was going to hamper him in his dealings with the Kremlin. He said he doubted that any Ukrainians would take Putin up on the offer.

"Ukrainians are free people in a free country," he said in a statement posted on Facebook in Ukrainian and Russian – the point of which is Zelenskiy has already started to direct his message not just at the Kremlin but at the Russian people as a whole. This is Putin’s weakness, because as Russia’s real income goes into its sixth year of stagnation faith in Putin is starting to fade. Zelenskiy is positioning himself to become not just Ukraine’s president, but a role model of what a president should be for all of the countries of the former Soviet Union (FSU) by going over the head of the governments and appealing directly to the people of the FSU using social media. In effect Zelenskiy could become the face of the Russian opposition.

“But what sets Ukraine apart is that here we have free speech, media and internet. And that is why we know what a Russian passport really means: the right to be arrested for a peaceful protest; the right to have no free and fair elections; the right to forget that the inalienable human rights and freedoms even exist,” Zelenskiy's post reads.

“Ukrainians are a free people in a free country that is independent, sovereign and indivisible. Ukrainian citizenship means freedom, dignity and valour. This is what we have been defending and will continue to defend. Ukraine will not give up its mission to be a model of democracy for the post-Soviet states, which will include extending protection, asylum and Ukrainian citizenship to anyone ready to fight for freedom. We will shelter and defend anyone ready to fight side by side with us for your valour and victory,” Zelenskiy concluded.

Zelenskiy introduced this theme in his election victory speech with what may become prophetic words: “To countries of the former Soviet Union: Look at us. Anything is possible!”

The danger for the Kremlin has always been if Ukraine can be turned into a success and incomes catch up with or overtake Russia, that would be an extremely effective way of undermining the Putin regime. As it was the Ukrainian presidential debate was watched by millions of Russians as it was streamed online. It led to the widespread reaction: “Why don't we have presidential debates?” amongst Russians.

However, Zelenskiy still has a major challenge ahead of him if he is going to be able to fulfil any of these promises. Currently he doesn't have a single representative in Ukraine’s parliament and without an associated political party in the Verkhovna Rada he is powerless to make more than token reforms. Parliamentary elections are due in October and Zelenskiy needs to bring off a second victory for his newly formed Servant of the People party, which is currently leading the polls and would take 25% of the vote if elections were held on Sunday.

Despite the rhetorical slugfest, Zelenskiy also held out an olive branch and said he remains open to renewing negotiations in the Normandy format talks that include Germany, France, Ukraine and Russia. The next meeting is scheduled for May.

"I would like to note once again that I am ready for negotiations. I hope that at the next meeting in the Normandy format Russia will demonstrate readiness for de-escalation ... Our side is ready to discuss new conditions for coexistence of Ukraine and Russia," Zelenskiy wrote on Facebook, adding the exchange of prisoners under the "all for all" formula should be a concrete confirmation of Russia's readiness for de-escalation. Zelenskiy made the return of POWs a top priority for his dealings with Russia during his campaign.

Putin’s reply was dig his heels in and insist on some of the clauses in the Minsk II agreement that Zelenskiy has yet to comment on. The Russian leader pointed to the statements Zelenskiy had made during the election campaign that he did not plan to sign a decree granting amnesty to the Donbas conflict’s participants and did not intend to provide special status to certain Donbas areas as stipulated in the Minsk agreements. "How will it be possible to resolve the LPR-DPR issue without implementing the Minsk Agreements? I would very much like to ask him this question and discuss these matters with him," Putin said.

The Kremlin is likely to be uncooperative until the October parliamentary elections pass as until then Zelenskiy will not have the power to implement any promises he may make. If Zelenskiy’s party does badly in the elections the comedian turned politician runs the danger of being a lame duck president.

KYIV BLOG: Ukrainian President Volodymyr Zelenskiy is stuck between a rock and a hard place

KYIV BLOG: What’s to be done about those who are to blame in Ukraine?