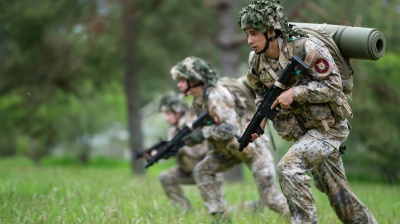 Latvia plans to reintroduce national military service, starting next year initially on a voluntary basis, and to build a new international military base as it strengthens its defences in the face of Russian aggression in its immediate neighbourhood, reported LSM.lv, a Latvian news website.

Neighbouring Estonia and Lithuania already have national military service, but most EU countries have abolished the requirement, which is seen as costly, unpopular and of dubious military value.

Minister of Defence Artis Pabriks announced at a press conference on July 5 plans to reintroduce national military service for males from 2023, first on a voluntary basis and then in compulsory form after five years. This comes despite reservations about national service being expressed by Latvia's defence chief in February this year.

The Ministry of Defence says that the national service will be gradually introduced over the course of five years. From January 1, 2023, the first phase of implementation will take place, for which it will be possible to apply voluntarily.

It is expected that recruitment to the service will take place twice a year, on January 1 and July 1. It is planned that after a five-year transition period, the service will be compulsory for men aged 18 to 27.

However, if a person at the age of 18 is still studying, they will be able to defer their service until after graduation.

National service will last for 12 months, but one month of that will be holiday, and people can expect to be paid €400 plus travel expenses per month, slightly less than the national minimum wage of €500.

Women will be able to apply to the National Defense Service voluntarily, the Ministry of Defence plans.

Only citizens of Latvia will be admitted to the service and individuals will also have to meet health requirements, which are analogous to those of the National Guard.

Latvia also plans to establish another international military base in a zone straddling the regions of Aizkraukle and Jekabpils in the south of the country,  Pabriks said.

Most of the property where the military base is planned to be built currently belongs to state forestry company Latvijas valsts mezi (Latvian state forests). It is fairly close to the border with Lithuania.

The Ministry of Defence plans to take over 81 different plots of land with an area of 1,072 hectares in the territory of Aizkraukles and Jekabpils counties for the creation of the Zalve military zone. The expropriation process will take place in accordance with a special law.

"Along with the strengthening of national defence, the creation of the new military range will create new business opportunities, additional jobs, as well as contribute to the development of the region's infrastructure and economy," the defence ministry said in a statement.

Local residents will be able to continue to gather mushrooms and berries in "most" of the military zone, and the national armed forces will not prohibit movement on regional and national roads, but "movement may be restricted for the duration of the military training, which the public will be informed about."

"The military zone will be established in an area rich in habitats and various bird species. The national armed forces will respect the requirements of environmental protection and treat nature with care," the Ministry said, adding that the creation and use of new military ranges would not endanger protected birds and their nesting places.

The Canada-led Nato battlegroup group in Latvia currently comprises almost 2,000 soldiers, but the new commitment is to create combat-ready groups of brigade size – usually of 3,000 to 5,000 soldiers.

At present Nato forces are based at camp Adazi near the Latvian capital, but the arrival of large numbers of reinforcements will mean not only that more bunk beds are required but that suitable infrastructure and services for soldiers, support staff, and social amenities must be required. Establishing all of that on a virgin site will be a major undertaking.

The CEEC platform, which was once called the 17+1, now has 14 members plus China.