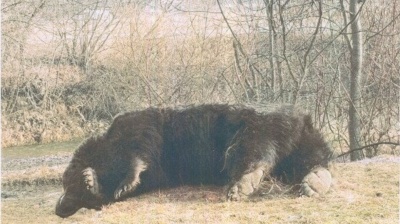 The brown bear known as Arthur was 17 years old and the largest bear ever seen in Romania.
By Iulian Ernst in Bucharest May 6, 2021

The Romania National Environmental Guard (GNM) announced that it is investigating the killing of a large brown bear that activists allege was illegally shot by a Liechtenstein prince during a hunt in the Carpathian Mountains.

Asked if poaching is considered as an option in the killing of the bear, Octavian Berceanu, the head of GNM stressed that this "is the main suspicion.”

Agent Green and VGT (Austria) condemned the killing of the brown bear named Arthur by Prince Emanuel von und zu Liechtenstein, who came to Romania in March, the NGOs said in a press release.

According to Agent Green, Prince Emanuel von und zu Liechtenstein, a resident of Riegersburg, a town in the Austrian region of Styria, allegedly used a derogation from the Romanian Ministry of the Environment as a pretext to shoot the bear in Romania.

However, the derogation was issued for a mother bear that had caused damage last year to some farms in Ojdula, Covasna county, and not the giant bear killed by the prince. The prince did not kill the problem bear, but a male that lived deep in the woods and had never come close to inhabited areas.

“Arthur was 17 years old and the largest bear ever seen in Romania, most likely the largest in all of Europe … I wonder how the prince mistook a little female bear that was seen near a village for the largest male bear that lives deep in the wild,” said Gabriel Paun, president of Agent Green, in a statement.

Arthur was a brown bear species that is strictly protected by EU law and the Bern Convention. Exceptions can only be granted in certain cases, after a detailed examination of the situation, and killing can only be used as a last resort when other options, such as relocation, have failed and the bear is endangering lives or households.

According to VGT, since Romania joined the EU in 2007, it has repeatedly violated EU laws by allowing the killing of bears to protect people and livestock, while failing to implement any coexistence and adaptation measures. Nor has Romania counted the bear population using scientific methods such as DNA testing, instead basing assessments of the bear population on direct observations by hunting administrative districts which can lead to multiple counts of the same bear, the NGO said.

“It is a shame for Austria that Prince Emanuel killed this beautiful bear, which is loved in Romania. It cannot be that influential Austrians can hunt protected animals in other countries for a lot of money! The hunt for trophies is generally reprehensible and is also rejected by the population. We demand a general ban on trophy hunting and the ban on importing trophies, as in the ivory trade, and we appeal to the prince to abandon this bloody hobby,” said Ann-Kathrin Freude, VGT campaigner.