Lukashenko meets with Putin in Sochi 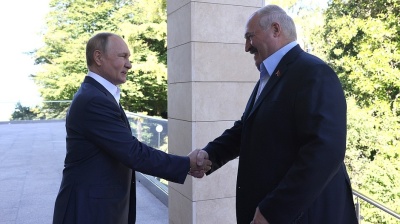 Belarusian President Alexander Lukashenko and Russian President Vladimir Putin held talks on economic, security and political co-operation throughout Monday and Tuesday (26 and 27 September). The official statements and pictures coming out from the meeting showed a quite uneasy Putin and reveal cracks in the bilateral economic co-operation.

Despite being originally planned to be held during the Shangai Cooperation Organization’s (SCO) meetings in Samarkand between September 15-16, the meeting on the “bilateral agenda” was instead held at Putin’s seaside retreat in Sochi.

During the meeting, what has been described as “hunched” and “uncomfortable”, Putin also sat through a long exposition by the Belarusian strongman as he gave his thoughts on the fallout from Putin’s mobilisation announcement.

Lukashenko told Putin that “Okay, let's say 30,000 or even 50,000 people have fled the country. Imagine they had stayed here… They are not the people to rely on, are they? Let them flee. I don't know how you feel about it, but I wasn't particularly worried when several thousand left Belarus in 2020.”

He also emphasised that some of those who fled will want to come back, saying that “You just need to decide what to do with them: either let them come or let them stay there. What they have done is wrong.” Lukashenko has not faced hundreds of thousands of politically persecuted Belarusians returning home, but those who have returned (even for short holidays) have not been able to avoid arrest.

The meeting was certainly centred around economic, security and political co-operation, with Lukashenko likely wanting to seek more economic support for the Belarusian economy, which has been hit hard by western sanctions this year. Being a country of just above 9mn people, Belarus has a weaker home market than Russia, even if it’s inherited a heavily industrialised economic structure from the Soviet days.

To counteract Western sanctions, Belarus and Russia have begun a large-scale bilateral joint effort on import substitution, appointing many new working groups for the matter. This strategy is of particular importance to Belarus, whose finance, trade and economy ministries are working overtime to secure new supply chains for its exports and industry imports.

In August, Belarus’ First Deputy Prime Minister Nikolai Snopkov informed Belarusian state media that “Belarus and Russia intend to sign an agreement for a loan of $1.5bn to carry out import substitution projects at the beginning of September.” Putin has previously furnished Belarus with such loans to restructure its outstanding debt, which is 50% held by Russia.

However, nothing more was said about the loan after Snopkov’s statement, and when asked about the matter on Tuesday the Kremlin’s Spokesman Dmitry Peskov told reporters that “the talks are still ongoing.”

On Tuesday, Belarusian Finance Minister Yuri Seliverstov told the Presidium of Belarus’ Council of Ministers that Belarus’ budget for 2023 would be running a deficit of around BYN3-4bn (approx. $1.2-1.6bn). The main reason for this deficit was the fact that Belarus’ major export revenues of potash and oil were unlikely to fully recover in the near term. These sectors have both been heavily targeted by Western sanctions over the past year, and Seliverstov’s statement is another strong indicator that the sanctions hare having significant effects.

According to Seliverstov “it will be provided with resources in order to finance expenses.” For this year, his ministry had planned for a deficit of around BYN2.8bn (approx. $1.1bn), but in January-September the deficit was BYN2.3bn (approx. $900mn). Therefore Seliverstov concluded that “There are no big issues; we finance everything in full.” However, where these finances will come from is not clear for anyone, and probably not even for the Belarusian government officials themselves.

What is Putin asking for?

Lukashenko does not seem to be getting his loan, at least not without additional support to Russia. However, showing support for Putin’s mobilisation announcement or discussing a deepened economic co-operation could all have been done over the phone or even on a ministerial level. The fact that the meeting was moved from the sidelines of the SCO meeting to an official visit by Lukashenko to Sochi, one can imagine that the two leaders had things to discuss which could only be solved behind closed doors in Russia. Possibly, Putin is asking the Belarusian strongman for more than he is willing to give up.

On the first day of their meeting, Putin mentioned that they would discuss specific major intergovernmental projects. To this, Lukashenko replied that while they talk a lot about their plans and prospects, he had analysed Putin’s instructions given to their respective governments and “the way Belarus held its end of the deal. We have practically no failures.” Interestingly enough, this last part of this statement was excluded from the initial article by the Kremlin's press service but included in Belarusian State Media outlet BelTA's reporting.

This question is almost certainly related to Belarus' role in Russia’s invasion of Ukraine, something which was clearly a demand from Putin’s side for Russia to give continued political and economic support to Lukashenko’s regime.

However, the Kremlin has not only forced Belarus closer to Russia by alienating it from the West, Ukraine and other parts of the world through its co-operation in Moscow’s invasion. As a result of having backed itself into a corner with Russia as its only ally, the Minsk regime has recently ratified and actually begun implementing several new projects that are a part of Russia’s and Belarus’ “Union State” agreement, something which it has stalled for over two decades up until now.

Lukashenko was present when Putin told reporters in April that Russia, Belarus and Ukraine are a triune people. While Putin doesn’t feel the need to invade Belarus like he’s done with Ukraine, he certainly wants Belarus to fully integrate with Russia in accordance with the Union State agreement. Lukashenko might feel that he’s held up his end of the deal, but it could be that Putin is asking for even more now that he knows that Lukashenko has nowhere to turn but to him.

After their previous meetings, Lukashenko has not waited long to increase his military, economic or political support for Russia. While one doesn’t have to expect any sudden jumps from Lukashenko’s side, the agreements reached at their meeting could slowly take form throughout the next few months, if in fact any agreement was reached at all.

VISEGRAD BLOG: When Eastern European states speak out they are now listened to
Trial begins in Belarus against exiled opposition figures
What does 2023 hold for Belarusian potash exports?