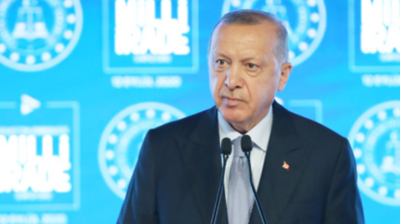 Erdogan during his speech. / Presidency of Turkey.
By bne IntelIiNews September 13, 2020

French President Emmanuel Macron has drawn the wrath of Turkish counterpart Recep Tayyip Erdogan by stating that his problem is not with the Turkish people, for whom he has great respect, but with the Erdogan government.

Erdogan responded with characteristic angry rhetoric on September 12, telling Macron “not to mess” with Turkey.

Relations between the supposedly Nato-allied nations of France and Turkey have grown fraught in recent months over Ankara’s exploration for gas and oil in areas of the eastern Mediterranean that are claimed by EU members Greece and Cyprus. Paris is also unhappy at Turkey’s intervention in the Libyan Civil War and role in the Syria conflict.

“Don’t mess with the Turkish people. Don’t mess with Turkey,” Erdogan, under pressure from mounting economic problems, said during a televised speech in Istanbul on the 40th anniversary of the 1980 military coup.

Macron on September 10 had said Europeans must be “clear and firm with, not Turkey as a nation and people, but with the government of Erdogan, which has taken unacceptable actions”.

He was speaking before the summit of the EU’s seven Mediterranean nations, which threatened Turkey with sanctions over its hydrocarbon exploration activities. France has lately strengthened its military presence in the eastern Mediterranean to back Greece and Cyprus. The two countries say Turkey is attempting to intimidate them with a series of naval exercises.

‘Trying to drive a wedge’

Macron also prompted a response from Omer Celik, a spokesman for Erdogan’s ruling Justice and Development Party (AKP). He wrote on Twitter that Macron was deploying a “colonialist” game by trying to drive a wedge between Erdogan and the Turkish people.

“The country against which you are using threatening language is Turkey. Turkey will give you the most appropriate response. Mr Macron, do not get us confused with those tribal states that you can easily trick. Nobody has the power to separate the elected president of this country and its people,” Celik added.

In his speech, Erdogan accused Macron of “lacking historical knowledge”. “Mr Macron, you’re going to have more problems with me,” he threatened. France, he said, “couldn’t give a lesson in humanity” to Turkey. Macron, he added, should look first at France’s own record, notably in Algeria and its role in the 1994 Rwandan genocide.

“Macron, you already don’t have much time. You’re on your last legs,” Erdogan also said, referring to the next French presidential election, which will be held in 2022.

Erdogan additionally accused France of intervening in Libya “for petrol”, and in Africa for “diamonds, gold, copper”. However, Turkey itself was last week reportedly involved in negotiating for oil rights in Libya.

US Secretary of State Mike Pompeo, meanwhile, visited Cyprus on September 12 and, after meeting Republic of Cyprus President Nicos Anastasiades and Foreign Minister Nikos Christodoulides, told reporters: “Increased military tensions help no one but adversaries who would like to see division in transatlantic unity. Countries in the region need to resolve disagreements, including on security and energy resource and maritime issues diplomatically and peacefully.”

Pompeo said his trip to Cyprus would complement phone calls by US President Donald Trump with Erdogan and Greek Prime Minister Kyriakos Mitsotakis.

The European Union has said it will draw up a list of new sanctions on Turkey at the end of September unless Ankara comes to the negotiating table to resolve the territorial dispute with Greece and Cyprus.

The seven EU members with Mediterranean coastlines gathered for a summit in Corsica, France. They said in a joint communique that they reiterated their “full support and solidarity with Cyprus and Greece in the face of the repeated infringements on their sovereignty [...] as well as confrontational actions by Turkey”.

“We maintain that in the absence of progress in engaging Turkey into a dialogue and unless it ends its unilateral activities, the EU is ready to develop a list of further restrictive measures that could be discussed at the European Council of Sept 24-25,” they added.