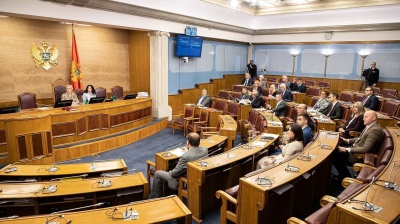 Most Montenegrins believe that the current parliament can't produce another government that would work properly. / skupstina.me
By bne IntelliNews November 25, 2022

A majority of Montenegrins see a general election as the best solution to the current political crisis, showed a survey carried out by the Centre for Civil Education released on November 24.

The country is currently in political deadlock following the collapse of Dritan Abazovic’s government, as President Milo Djukanovic has refused to give a mandate to Miodrag Lekic — the candidate backed by the majority in parliament — to form a new government.

Djukanovic wants an early election. However, the poll wasn’t an endorsement of his position either; 33% of Montenegrins want early parliamentary and presidential elections. A further 30% want just a snap general election.

Only 19% of Montenegrins believe that the current parliament can produce another government that would work properly.

Meanwhile, trust in institutions remains extremely low. The trust in political parties is the lowest at 1.92. 76% of people believe that politicians do not take any responsibility for their actions.

While Djukanovic seeks an early election, the parliament recently backed changes to the law on the president that would limit his powers. Djukanovic vetoed the changes, though the parliament is expected to overrule the veto.

Thousands of Montenegrins, supported by Djukanovic’s Democratic Party of Socialists (DPS), rallied in the capital Podgorica late on November 17, demanding an early election and the annulment of changes to the law on the president.