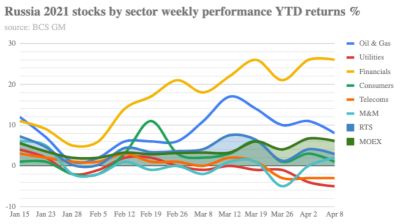 Buyers of Russian stocks and bonds have weathered the recent rising geopolitical tensions, with only mild selling by international investors.
By bne IntelliNews April 9, 2021

Russian equity markets saw a surprisingly modest outflow of $10mn from Russia-dedicated funds during the week’s trading ending April 8 despite the arrival of the most Russian troops at the border with Ukraine since 2014, according to stock trackers EPFR Global as cited by BCS GM on April 9.

“Fund flows for the Russia-dedicated fund category returned into the minor negative territory last week. Looking into details reveals the total flow number would be close to zero if it were not for the Pictet – Russia Equities fund that reported outflows in the amount of $18mn for the week,” Slava Smolyaninov, head of strategy at BSC GM, said in a note. “Safe to say that Russia is ignored by global equity investors these days.”

Smolyaninov went on to say that the modest outflows should be seen as good news as tensions ratcheted up significantly over the last week as Russia aggressively moved troops close to Ukraine’s border and sent reinforcements to its military bases in the annexed Crimean peninsula.

The ruble, however, did not fare as well, having tumbled from a recent strength of around RUB73 to the dollar to RUB78 briefly on April 8, before recovering to RUB77.2 at the time of writing on April 9. All in all, the Russian currency has given up most of its gains YTD but is still up by 3% from the start of January. The value of the ruble this year has largely decoupled from oil prices and has become hostage to the ebbs and flows of geopolitical tensions.

Despite the apparent resilience to the mounting geopolitical risks and the prospect of harsh new US sanctions that will target Russia’s domestic debt, Smolyaninov warned that the markets remain nervous and could turn quickly.

“Global investor tolerance of [geopolitical] risks can end swiftly. Inflows into GEM equity funds slowed to $1.6bn. Elsewhere, global money was increasingly worried about EM equity outlook – all major regional and country fund categories reported outflows, albeit nothing dramatic. We read negatively into the data, [pending] developments on the Russia-Ukraine border and given the abating global interest to EM stocks. EM assets are likely to underperform global peers for now,” Smolyaninov said.

As bne IntelliNews reported on its weekly stock market wrap on Twitter (@bneintellinews), Russian stocks saw mild selling, with the leading dollar-denominated Russia Trading System (RTS) falling from recent highs of just over 1,500 to retreat to a low of 1,429 this week, reducing the YTD return to just 2%.

There was modest selling of sectors like utilities and metallurgical companies. However, the large inflows into banking stocks were unaffected and remain up 26% YTD. Investors have clearly been taking a position assuming an economic recovery in 2021 as banking stocks are often used as a equity market proxy for economic recovery, and that belief has not been affected by the recent nerves.

Bond investors are even more impervious to the gyrations of geopolitics, although Russia-dedicated bond funds also experienced very minor outflows, while combined emerging markets (EM) bond funds that include Russia saw $70mn of inflows compared with $20mn of outflows the week before, which was the best result since February.

The foreign investors share of the OFZ market has been falling slowly since the recent peak of 31.8% in June last year, and had currently dropped to 22.7% as of February. However, the amount invested has risen over that time from RUB3.068 trillion to RUB3.140 trillion ($40.7bn).