MITTELEUROPEAN INSIGHTS: Only Romania is really serious among the Euro-flirts 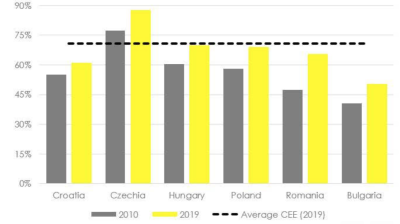 Real convergence: GDP per capita at PPP (% of Eurozone average).
By Gunter Deuber and Dorota Strauch of Raiffeisen Research in Vienna and Warsaw February 1, 2021

Croatia and Bulgaria, two smaller Southeast European countries without alternatives, are currently on a course towards the euro. Partly because of lack of monetary and exchange rate autonomy, the economic cycles of both countries are very dependent on the euro bloc. Croatia and Bulgaria could join the euro area by the middle of this decade. But of course, this is only in an optimistic scenario and if they are able to implement their demanding commitments after joining the ERM II. And here euro accession has become more difficult than before, because until now it has not been linked to such comprehensive goals in the institutional and political sphere.

But it is not only in institutional or political terms that both Southeast European countries are not euro dream candidates. Croatia and Bulgaria are even further away from the euro area than many other CE/SEE countries, measured for instance by income levels or real convergence. Here, the Czech Republic or, to some extent, Hungary or Poland would be more suitable candidates. Even Romania's income level in relation to the euro area is higher than that of Croatia or Bulgaria.

Nevertheless, after Croatia and Bulgaria, it is likely to remain quiet on the euro enlargement front for a very long time. From the perspective of the remaining current potential euro candidates – Czechia, Hungary, Poland and Romania – economic arguments, albeit from different angles, for accession are not convincing at present. The arguments of lower transaction costs, smooth access to deep euro capital markets, or the benefits of deeper integration and supposedly better economic growth prospects of euro membership are hardly convincing at present. Moreover, the current euro area outsiders in CE/SEE have been quite successful with their own national currencies.

Furthermore, EU and ECB crisis management has not been centred around the euro area in the context of the COVID-19 crisis – the Next Generation EU package or the ECB swap lines for CE/SEE countries are worth mentioning here. Therefore, political incentives to join the currency union have possibly decreased for the current outsiders. In some cases, the degree of de facto euroization (e.g. through foreign currency loans or foreign banking sector ownership) has decreased. In this respect, it is also not surprising that there is currently no clear euro strategy or perspective in any of the four countries. And the medium-term prospects are not getting any better.

We think that inflation and monetary policy cycles between the euro area and CE/SEE are unlikely to be in sync in the coming years. Currently, we see first monetary policy rate hikes in CE/SEE in 2022, something that is definitely not around the corner for the ECB. Furthermore, we do not think that such economic arguments will really be overshadowed by an EU integration policy calculus in the coming years. In fact, at a general policy level, divergence between EU institutions and some CE/SEE countries intensified in recent years, while independent or “national” banking sector policies are also partly en vogue. Not to forget that there has also been good experience in the recent past with an independent conventional and/or unconventional monetary policy orientation in CE/SEE.

Since there is no hurry, countries like Hungary or Poland have also proclaimed ambitious convergence targets to take the wind out of the sails of the euro issue. They want to reach 85-90% of the income level of the euro area or the richest euro countries before deciding whether to enter the euro. That is the current income level in the Czech Republic and so the issue can be put on the back burner. At present, real convergence with the euro area in Poland and Hungary is around 70%, and it will probably take at least 10 years to catch up significantly further.

Moreover, in the past some economists and market observers were probably perennially too optimistic on this front. We cannot rule out the possibility that the issue of euro adoption may gain some momentum in the late 2020s, but according to our current assessment, we do not see any of the four larger CE/SEE euro area outsiders as a full member of the monetary union until the end of the 2020s. The possibility of an ERM II membership before then is in our opinion a bit higher though.

Romania to join ahead of Poland and Hungary – Czechia the next Sweden?

With less emphasis on economic arguments, the euro accession question is increasingly becoming a purely political question. This means that in the coming years the euro question could be shaped above all by shifts in politics and power or by electoral decisions. In addition, it should not be forgotten that without the UK the gap between the euro area and the EU has narrowed considerably and that many important EU decisions could in the long term increasingly become euro decisions, even if these patterns were less present in the current crisis.

Regardless of this, in most CE/SEE countries the euro is now in any case the winner – witness Romania. Here, the sentiment towards the euro has always been positive, both among individuals and the authorities. Currently, we are inclined to see Romania in the euro area “waiting room” in the late 2020s. For Romania the incentives are possibly the highest when looking at the widespread usage of the euro and the overall positive attitude towards the currency within the population. Moreover, substantial savings in euros complicate the crediting process, as the extension of foreign currency loans is much more restricted than in the past. Even though the inflation rate has remained at low levels over the past decade and the exchange rate has been stable enough, euro-denominated deposits account for a large part of the total deposits of the population.

In the case of Czechia we see the country possibly turning into the “Sweden” of Central Europe, i.e. being part of the EU, but not joining the monetary union for a long time despite compliance with the Maastricht criteria, and not entering ERM II on a voluntary basis. In the case of Poland and Hungary we think it makes sense to wait with a clear euro strategy, as the degree of real and nominal convergence (especially of inflation cycles) is less advanced here.

Who would have thought that the once poorest country in the EU's eastward enlargement could introduce the euro (far) ahead of Hungary, Poland or especially the Czech Republic. But there is still a lot of time until then, at least 10 years, and until then there will be a lot to deal with in terms of interest rate and currency risks and political swings in the CE/SEE region.