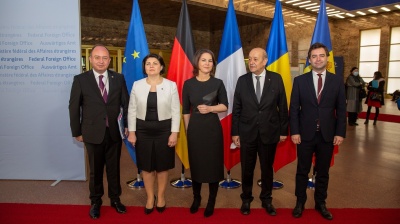 Donors attending the Moldova Support Conference in Berlin, co-organised by Germany, France and Romania, have pledged €695mn to help the small ex-Soviet country as it deals with an influx of refugees from neighbouring Ukraine.

With a population of around 2.4mn (not counting those working abroad), Moldova is hosting nearly 100,000 refugees and is providing support to many more who pass through on their way to other countries. Separately, high energy prices have hit the country hard as it is fully dependent on imports, while its exports have been disrupted by the war in neighbouring Ukraine.

"Since the beginning of the war, 400,000 refugees have crossed Moldova's borders and 100,000 have decided to stay," said Moldova's Prime Minister Natalia Gavrilita said at the conference. "Almost half of them are children, these are vulnerable populations."

"To this end, we agreed today to support Moldova with loans, budget support and other financial assistance worth €695mn."

Out of this, Germany will contribute €72mn as a grant and €50mn as a no-strings-attached loan, plus other loans and financial support to the tune of €196mn, according to Deutsche Welle.

The European Union earmarked €53mn for Moldova, to be partly extended through its arm EUBAM which provides help at checkpoints and the International Organisation for Migration (IOM).

US ambassador to the United Nations Linda Thomas-Greenfield announced on April 3 in Chisinau that working with Congress, the United States will provide an additional $50mn to help the government of Moldova and its people cope with the impacts of Russia’s brutal and unprovoked war on Ukraine.

Baerbock also said Germany would work to help Moldova free itself from its dependency on Russia for energy supplies.

The announcements were made during a joint press conference as Baerbock met with her Romanian and French counterparts Bogdan Aurescu and Jean-Yves Le Drian in Berlin, as well as Gavrilita and Moldovan Foreign Minister Nicu Popescu.