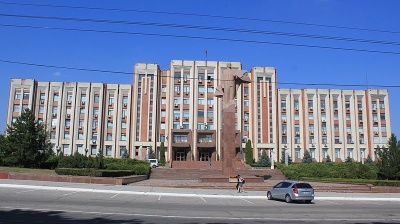 By Iulian Ernst in Bucharest September 9, 2019

Major companies in Moldova’s pro-Russian separatist republic of Transnistria were instructed by legitimate banks in Moldova to close their accounts on September 5, which will impede their operations, particularly their foreign trade activity.

This was just intended to increase transparency, Moldova’s central bank said, but the move is likely to severely impact key Transnistrian companies.

At present there are only three banks in Transnistria, controlled either by the authorities or by the Sheriff group that dominates the separatist region’s economy. They can carry out external operations in dollars or euros through correspondent accounts opened in banks in Russia or Austria. But they are blacklisted by the US authorities, meaning their operations in US dollars are subject to screening and certain restrictions. Also they can do operations in Moldovan lei through a clearing house opened in Tiraspol by the National Bank of Moldova (BNM).

The BNM explained that Moldovan banks are only adjusting to international regulations against money laundering and terrorism financing, and not all the 400 Transnistrian companies with accounts in Moldova were denied the right to hold an account.

Transnistria reported that 25 companies, including large ones, have already closed their accounts.

"On September 5, a Moldovan commercial bank blocked all operations related to the accounts held by several Transnistrian companies. The companies were notified to close their accounts. Thus, the Transnistrian importers are not able to purchase goods and to conduct operations with foreign partners,” informed the Transnistrian state news agency Novostipmr.com. The central bank in Transnistria reports that the problems have started since the beginning of the summer, immediately after the change of leadership in Chisinau, thus suggesting that the former government in Chisinau had not created such problems.

"Since June 2019, requests have been received from the Moldovan commercial banks for the Transnistrian companies to close their accounts. These requests lacked proper explanations. Companies have sought to open accounts in other commercial banks but since September 5, these actions, in our opinion, have acquired a systemic character,” said Alexei Melnik, the first vice-president of the central bank in Transnistria.

The political context of the bank account dispute is particularly relevant.

The reforms pursued by the BNM over the last few years, resulting in the three largest banks being liquidated and three others having their non-transparent shareholders replaced, support the scenario of tighter regulations carried out in line with the country’s agreements with the IMF that require such tough steps.

However, the creation of new tensions at this moment is also in line with the policy of the opposition Democratic Party (PDM) that uses each and every opportunity to pit the two sides of the ruling coalition — the pro-EU ACUM block and pro-Russian Socialists — against each other.

Incidentally, Moldova’s central bank is headed by Octavian Armasu, a former member of the PDM’s last government that took a firm stance against Russia and Transnistria’s claims for independence.

Armasu was minister of finance in the cabinet of Pavel Filip, backed by the  PDM which was headed at that time by oligarch Vlad Plahotniuc. The PDM government closely cooperated with Ukraine in order to diminish the power of the pro-Russian authorities in Tiraspol.

The reasons for the action against Transnistrian companies might also include economic ones: the new regime in Transnistria has reportedly put an end to profitable joint businesses carried out by politicians in Chisinau and Tiraspol.

Now, President Igor Dodon is gradually taking control over the foreign policy and military areas (to the benefit of Russia), but the broad picture remains complex: while Transnistria insists it deserves independence, Dodon has seemingly agreed with the Russian authorities that the best option would be to give the territory a high degree of independence as part of a federal state of Moldova.

Alexei Melnik of Transnistria’s central bank claimed that the separatist territory has been under certain restrictions for all the years of its existence.

“The BNM has been trying all the time to somehow limit the activities of Transnistrian banks. In 2002, in fact, commercial banks of Transnistria were ousted from the financial market of the Republic of Moldova. The BNM has repeatedly sent letters to the Bank of Russia with a request to help ensure that commercial banks of the Russian Federation, which have correspondent relations with Transnistrian banks, terminate these relations,” Melnik said.

But the most powerful blow to the Transnistrian banking system was the publication by the US Federal Treasury in 2011 of a document urging US banks to exercise caution when making payments involving financial institutions of Transnistria.

“In practice, getting on the Financial Crimes Enforcement Network (FinCEN) list means that all operations with the US dollar of our commercial banks fall under close scrutiny and some restrictions. This affects the timing of operations, the delay, and sometimes the refusal to conduct operations,” Melnik explained.

After that, the only way out of the situation for Transnistrian companies was to open accounts in banks in Moldova, as recommended by international mediators in the negotiations on the Moldova-Transnistria settlement.