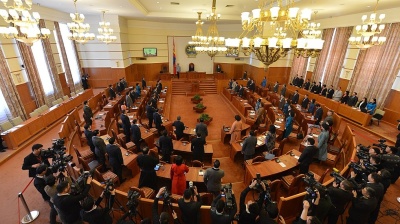 Mongolian members of parliament in session.
By Kanat Shaku in Almaty June 23, 2020

Mongolia will hold its eighth parliamentary election, on June 24, since the adoption of the East Asian nation’s democratic constitution in 1992.

The election will see a total of 606 candidates from 13 political parties and four coalitions alongside 121 independents competing for parliamentary seats. The incumbent Mongolian People’s Party (MPP), which holds 65 out of 76 seats, and the opposition Democratic Party (DP) are running candidates in all 76 election districts.

The record number of 121 independent candidates is believed to be a response to the perceived failures of the Mongolian two-party system, and public trust in the two political parties and Parliament has been dropping. Much of the frustration stems from the incompetence showcased by members of parliament and their direct involvement in the embezzlement of state funds as revealed in recent years.

Generally, Mongolian parliamentary election cycles see citizens overwhelmingly vote against the party controlling the parliament out of frustration that the sitting government has failed to achieve its promises. Actual policymaking is thus completely divorced from the group holding power at any given moment. The ball constantly rolls back and forth between the MPP and DP, with no concrete implications for policy.

East Asia Forum (EAF), a platform for analysis and research on politics and economics, pointed out in a recent article that arrests of candidates during the election campaign, which have never occurred before in an election cycle, set a dangerous precedent for Mongolia’s democracy. The five arrested candidates, two from the MPP and three from the DP, have been in conflict with either Prime Minister Ukhnaa Khurelsukh or President Khaltmaa Battulga. EAF has labelled the arrests politically motivated.

The EAF article, having pointed out a number of other reasons Mongolian democracy might be under threat, said the arrests were especially worrisome in the light of a parliamentary decision taken in March 2019. The decision extended the right to discipline judges before the National Security Council, made up of the President, Prime Minister and Speaker of Parliament. The move is seen as threatening the independence of the judiciary.