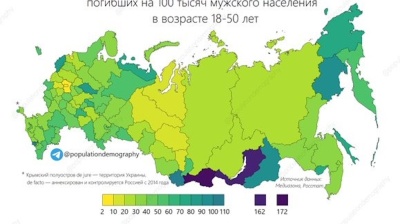 Russian opposition publication Mediazona released a map on social media that shows the highest mortality rates from the war in Ukraine are in Russia’s poorest regions.

The map shows the confirmed mortality rates per 100,000 of male population in Russia’s regions after ten months of the war on January 4.The data was gathered from open sources and was verified, according to Mediazona.

The publication points out that the highest mortality rates were from Tuva and Buryatiya, two of Russia’s poorest regions where the bulk of recruiting took place during Russia’s partial mobilisation that started on September 21. In total at least 300,000 men were press ganged into service.

However, the affluent cities in the northwest of the country such as Moscow, St Petersburg and Moscow region are at the bottom of the mortality league.

The purpose of a “partial” mobilisation that targeted the poorest regions was an attempt by Russian President Vladimir Putin to not compromise his unspoken social contract with the Russian population: you stay out of politics and we will stay out of your daily lives.

Given that 300,000 people is 0.2% of Russia’s total population of 146mn people, Putin did successfully raise fresh troops without interfering with the lives of the vast majority of the Russian population – especially those living in the European part of Russia where life goes on more or less as normal.

However, that may change. In his New Year’s Eve address, aimed specifically at the Russian population, Ukraine’s Defence Minister, Oleksiy Reznikov, warned that the borders would be closed on January 5, martial law declared and a mass mobilisation would begin.

Reznikov called on regular Russians to refuse to be mobilised and argued that they were not fighting for their country, but simply to keep the “criminals, murderers and rapists” out of jail.

COMMENT: The new Cold War will be different, and not only because of China
Turkish minister tells US ambassador ‘Take your dirty hands off Turkey’ as sanctions sparks fly
Ukraine anti-corruption officers raid home of Kolomoisky