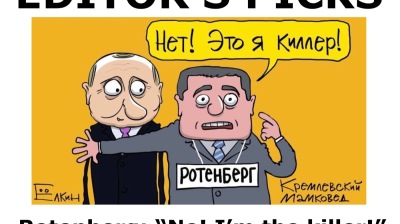 US President Joe Biden had the remark "Putin is a killer" attributed to him, but what he actually did was mumble "I do." Now there is talk of new sanctions against Russian debt and oligarchs, but both those scenarios remain very unlikely.
By Ben Aris in Berlin March 19, 2021

This comment first appeared in bne IntelliNews’ daily email digest of our best stories. It’s free to read. See the archive and sign up to Editor’s Picks here.

You must have been inundated with “Biden says Putin is a killer” stories by now. You can read our report here. But I think this story is overblown: Biden just fell into a journalistic trap. He didn't say “Putin is a killer” at all. He was asked if he thought Putin was a killer and mumbled the reply “I do,” which is not the same thing at all.

This is standard journalistic practice in interviews – fishing for a headline. I once interviewed Stalin’s grandson who was standing in elections in Georgia. At the end of the interview I asked the throwaway question: “What do you think your grandfather would do if he were running in these elections?” To which I got the reply: “It’s obvious. He would put all his opponents against the wall and shoot them.” I put this quote in the middle of the story, but my editors in London put it into the headline and led with that, gutting all the serious discussion I had on the importance of the elections… I learnt my lesson.

Biden should have dodged the question and talked instead about the lack of the rule of law in Russia, or something similar. Despite Putin’s bad image in the West it’s against protocol for one head of state to blithely accuse another of murder without concrete evidence – especially if “diplomacy is back.” Better to leave this sort of remark to your minions, as, from a purely pragmatic perspective, all it does is unnecessarily limit the top man’s room for manoeuvre in dealing with Putin.

The rakes on Russian social media immediately launched into a bit of fun over the whole “killer” story. A famous cartoonist produced a picture of billionaire oligarch Arkady Rotenberg stepping in front of Putin, saying: “No! I’m the killer!” in a reference to Rotenberg’s recent “admission” that he was the real owner of Putin’s Palace, the subject of Navalny’s last expose of Putin’s hidden wealth released in January.

The Kremlin was, rightly, outraged and has recalled its ambassador. Interestingly the Russian state-controlled media is downplaying the story, saying it was the ranting of a senile old man, or making exactly my point about it being a journalistic trap. It seems they don't want the whole story to become a thing in Russia. To me it seems for once the Russian press is being the grown-up in the room.

But the whole affair will cause new problems. Prominent commentators such as Swedish economist and a Senior Fellow at the Atlantic Council Anders Aslund and Tim Ash, Senior Sovereign Strategist at BlueBay Asset Management, are calling for sanctions to be imposed on Russian sovereign debt, leading oligarchs and chemical weapon input exports. CNN reports that new sanctions may be announced in the next week.

I still believe that the first two won’t happen and the third one has already happened and is purely symbolic. Too many US institutional investors hold Russian debt for the White House to be able to sanction Russian debt even if it wanted to.

Given the revolving door between the administration and Wall Street, I don't see how the White House can impose bans on holding debt that will cost the biggest investors in the US billions of dollars. The ban on owning oligarch Oleg Deripaska’s securities two years ago showed very clearly that if you ban investors from holding this debt then there is no one to sell to, so its value is immediately marked to zero. And you can’t get it off your books, but it becomes illegal to own it after the deadline. It's a major nightmare for institutional investors. Russia currently has about $40bn local OFZ bonds outstanding, of which 23.4% is owned by foreigners as of January 2021.

The really ironic twist to this story is that one way out of the resulting conundrum is for Russia’s MinFin to buy back the debt for pennies on the dollar – and MinFin has already said it is open to this idea – but all that would mean is Russia gets to retire a large amount of its debt very cheaply and that would only make Putin’s fiscal fortress stronger. Not the intended result at all.

Sanctions on oligarchs are unlikely, as that is to open a legal can of worms. Oligarchs have become more litigious and will sue in US courts that they are being unfairly punished in the absence of a court sentence or any due process at all. The EU has already brought up this concern when it imposed sanctions related to Navalny. Basically, you can sanction government officials as sanctions are a political weapon, but it becomes a lot more complicated when you sanction nominally independent businessmen for just being “close to Putin” unless you have reams of evidence, which no one does.

As for the chemical weapons, the Russians joke that the last time they got weapons from the US was during Lend-Lease, a deal that came to an end in 1945. Moreover, the US sanctions imposed last month in parallel with the EU sanctions in connection with anti-corruption activist and opposition politician Alexei Navalny's poisoning and arrest were made under the Chemical and Biological Weapons Control and Warfare Elimination Act of 1991 (CBW), which has a specific timetable and also automatically imposes bans on weapons exports.

However, we will see if Biden decides to do something radical next week and defy Wall Street. It’s possible, but so far he has been tough on the talk, but very cautious on the actions. Oddly enough, this is exactly how Boris Yeltsin used to operate. In those days the golden rule was: “ignore what they say, watch what they do.”

MOSCOW BLOG: Russia in May

MOSCOW BLOG: The freedom of the press is under attack in both the east and the west

MOSCOW BLOG: Russian economy starts to turn up but so does inflation