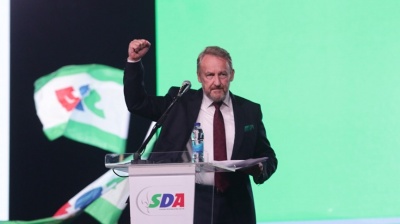 Veteran nationalist politicians Milorad Dodik and Bakir Izetbegovic might have lost the races for their respective positions in the October 2 elections in Bosnia & Herzegovina.

The projections are based on exit polls and parallel vote counts carried out by some parties in Bosnia and the results are not conclusive. However, if correct, they would show a shock defeat for the two politicians on an election day that was widely expected to return key nationalist politicians to power.

Bosnia is divided into two autonomous entities – the Muslim-Croat Federation and Republika Srpska plus the autonomous Brcko district. It also consists of three constituent peoples – the Bosniaks (Bosnian Muslims), Serbs and Croats.

On October 2, Bosnians voted for members of the state-level tripartite presidency, which includes one representative of each of the constituent peoples, as well as for state-level parliament, local parliaments and the president of Republika Srpska.

Izetbegovic, the leader of the main Bosniak Party of Democratic Action (SDA), seems to have lost in the race for the state-level presidency to Denis Becirovic, the candidate of the Social Democratic Party (SDP). This was based on partial exit poll by the SDA. In a short statement, the party said this loss was insignificant as it has won a majority in parliament, N1 reported.

The poll indicated that Becirovic, whose candidacy was supported by 11 more opposition parties, has won with more than 50% ahead of Izetbegovic who got 46%.

“For the first time after the war Bosnia & Herzegovina got a member of the presidency who is not coming from ethno-nationalist parties,” SDP leader Nermin Niksic commented as quoted by 24 hours news outlet.

Cvijanovic was until now president of Republika Srpska, but is switching places with Dodik who ran for the entity president post.

The outcome of that race is unclear. The SNSD claims Dodik won. However, his rival, Jelena Trivic, from the Party of Democratic Progress (PDP), also claimed victory based on her party’s partial exit poll. The leader of the PDP, Branislav Borenovic, said that based on one-third of all votes counted Trivic got 98,624 votes ahead of Dodik with 84,212.

Meanwhile, Zeljko Komsic, who is the current Croat member of the presidency, again won the race ahead of the Croatian Democratic Union’s candidate. Komsic’s election four years ago was disputed as he is from a Bosniak party, the Democratic Front, and Croats claimed at the time he was elected with Bosniak votes. On October 2, he won 70% of the votes, beating the other Croat candidate, Borjana Kristo.

A dispute over planned electoral reforms overshadowed the campaign period before this year’s elections.

For years, the two peoples living in the Federation have been trying to resolve the problem with the election of the Croat member of the presidency, who is currently elected with the votes not only of Croats but also of Bosniaks, which are a majority in the Federation.

In 2016, Bosnian Croat politicians filed a complaint with the constitutional court, arguing that the electoral mechanism to establish the House of Peoples in the Federation violates the constitution. The court partially accepted this appeal and gave Bosnia's state-level parliament six months to fix problematic parts of the election law. The changes have not so far been adopted, but according to some analysts the court’s decision has removed the legal basis for establishing the upper chamber.

In an attempt to push forward the process, the international community’s high representative in Bosnia, Christian Schmidt, wanted to use his Bonn powers to impose changes to the electoral law. Schmidt intended to impose amendments that would require the election of Croat or Bosniak MPs from each canton only if at least 3% of its population is from either of these peoples. However, his plan was strongly opposed by the Bosniaks and Schmidt backed off at the time.

On October 2, the high representative decided to move forward his plan and announced he is using his Bonn powers to impose electoral law changes in force as of October 3.

Schmidt said in a statement that the amendments aim to improve the functionality of the Federation and ensure timely implementation of the results of the October 2022 elections.

“This sets the stage for further electoral and constitutional reform, including to meet BiH’s commitments for EU integration and to address concrete problems facing the country. These measures also strengthen the constitutional safeguards provided by the Dayton Peace Agreement and the Constitution for constituent peoples while preventing abuse or paralysis of the system,” the high representative said in the statement.

The package includes amendments to the Election Law and the Federation Constitution, and only relates to the post-election establishment of indirectly elected bodies.

Schmidt has increased the number of seats for each of the two peoples in the Federation’s parliament to 23 from 17.

“The resulting distribution would correct the most severe over-representation of all three constituent peoples in cantons with very small populations of each people. Every constituent people in every canton would maintain the possibility to have at least one representative in the House of People,” the statement noted.

The amendments of the country’s election law increases the number of representatives in the Federation entity’s House of Peoples and the way they are chosen. They also set a deadline for the formation of the government after the election, as well as measures to ensuring functionality of the Federation.

RBI's 2022 profits soar to €3.6bn, with Russian operations representing more than half
Geopolitics overshadows Western Balkan nearshoring ambitions
Only Hungary and Russia heading for recession in 2023 as Emerging Europe shows its resilience

Ukraine anti-corruption officers raid home of Kolomoisky
1 hour ago
Bulgaria starts construction of gas link with Serbia
10 hours ago
RBI's 2022 profits soar to €3.6bn, with Russian operations representing more than half
1 day ago
Hawkish Iran helped stop larger Azerbaijani attacks says Armenia
1 day ago
Only Hungary and Russia heading for recession in 2023 as Emerging Europe shows its resilience
1 day ago