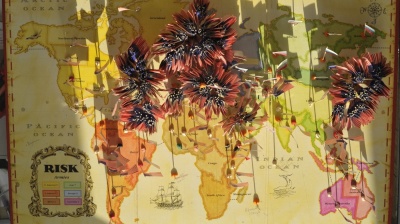 Are we in a world war? The fight in Ukraine is clearly existential for Russia, but it is less clear what the US' status is. / bne IntelliNews
By Les Nemethy CEO and founder of Euro-Phoenix Financial Advisors January 23, 2023

The conventional definition of a World War is that it involves the participation of multiple major powers in a global conflict. Yet one increasingly hears that the Ukrainian Wars signals the outbreak of World War III.

Until recently this had seemed far-fetched. The war is asymmetric: if the US can wear down the Russian military machine by channelling roughly 10% of its defence budget into a proxy war – and does not even have to mobilise a single combat soldier – that doesn’t sound like a World War.

Is the Ukraine War existential for the US?

Let us look at the evidence:

Today there are so many more dimensions of war than purely military. Military experts call it hybrid warfare – which includes:

In short, the Ukrainian war has unleashed a number of forces that serve to diminish US global hegemony. A Russian victory – or even just Russia keeping one or more of the four oblasts it recently occupied in Ukraine – may serve to highlight the limits of American power, and send a message that aggression can be rewarded.

So Todd is right in the sense that the Ukraine war is existential to the US because it may reduce US global hegemony. However, if US territory itself is not under threat, how can this be an existential threat? As geopolitical analyst Peter Zeihan argues, the US could retreat behind its own borders, and recreate “fortress America” – a disaster for much of the world, but not for the US.

In conclusion, the Ukraine War is an existential threat to US global hegemony, but not to US territorial integrity.

Does the Ukrainian War signal the outbreak of World War III?

The other element of Todd’s thesis is that neither side can back down. While the Ukrainian war has the potential to escalate into a full-fledged nuclear Armageddon, so far, all sides have shown remarkable adeptness at keeping a lid on the conflict, confining it to Ukraine. In my opinion, it is likelier that this war will continue for some time as a localised conflict. I do not rule out the addition of one or more similar conflicts of local nature.

The reality is that the world is becoming a much messier place. Combine the many facets of hybrid war (which do in fact touch US territory) and localised conflicts such as Ukraine – the likelier scenario is a continuation of this messy muddle – neither peace nor World War.

As one commentator aptly put it: if we are arguing about whether we are in World War III, then how can there be a World War? If there really were a World War, you’d probably know it!

Ukraine’s mocking of Iran over drone attack on military factory irks Tehran
M&A in Emerging Europe fell by 20% to €32.93bn in 2022
Belarus faces new sanctions by the EU and asset seizures by Ukraine

PANNIER: You won’t catch Turkmenistan putting all its eggs in one (Russian) basket

Turkmen President Serdar Berdimuhamedov’s visit to Beijing may not have secured more gas sales, but it did serve to reaffirm ties with the country’s only stable major partner.

PANNIER: A very Turkmen coup
4 days ago
OPINION: Bulgaria sets itself a tough task with Burgas-Alexandroupolis pipeline revival
7 days ago
RIDDLE: The Russian army in 2023
8 days ago
‘Yesterday’s strategy won’t do’ in Europe’s approach to Iran says Carnegie analyst
13 days ago
PANNIER: You won’t catch Turkmenistan putting all its eggs in one (Russian) basket
14 days ago