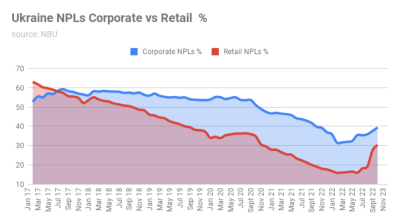 Ukraine's NLPs are up to 34% and rising. If they reach 60% then the banking sector will start to fail, leading to a possible wave of bankruptcies. / bne IntelliNews
By bne IntelliNews January 22, 2023

The share of non-performing loans (NPLs) in Ukraine reached 37% in December 2022, the highest level since the nationalisation of Privatbank in 2016. (chart)

According to NBU estimates, by the end of the war, the share of overdue loans may reach 60%, which will result in banks losing their profits and may lead to a wave of bankruptcies.

If a bank’s NPL expenses exceed its income, it will gradually lose liquidity and will not be able to conduct even customer cash transactions. Additionally, significant shares of NPLs in bank portfolios may limit their lending ability when it comes to the reconstruction of the Ukrainian economy, FPRI BMB Ukraine reports.

Ukrainian banks lost at least 30% of their portfolio on February 24, 2022 alone. Experts predict that to cover the losses to bank assets during the war, banks will try to maximise their profits by raising interest rates. This may also happen because borrowers are behind on making scheduled loan payments during the war.

Analysts in Ukraine agree that the ability of banks to issue loans after the war will depend on the volume of international investment in the economy and the amount of reparations that Russia pays to Ukraine, so a high share of NPLs in bank portfolios will not put an end to lending.

Ukraine’s mocking of Iran over drone attack on military factory irks Tehran
M&A in Emerging Europe fell by 20% to €32.93bn in 2022
Belarus faces new sanctions by the EU and asset seizures by Ukraine