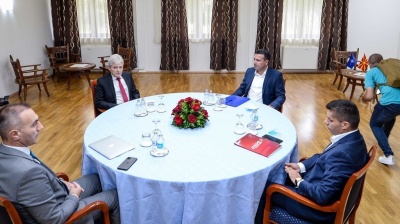 Leaders of the Social Democratic Union of Macedonia (SDSM) and the Democratic Union for Integration (DUI) reached an agreement to form the new government. / SDSM
By Valentina Dimitrievska in Skopje August 18, 2020

Zaev received the mandate from President Stevo Pendarovski to form the government on August 13, after the coalition he led with ethnic Albanian party Besa won a slim majority in the election. The SDSM won 46 seats in the 120-seat parliament versus 44 for the opposition VMRO-DPMNE party. The DUI has 15 seats.

The new coalition will have a slim majority in the parliament of 62 lawmakers and will include the Democratic Party of Albanians (DPA), which has one seat in the assembly.

"The coalition SDSM/Besa and DUI reached a coalition agreement for establishing a parliamentary majority, sharing of ministerial posts, and the composition and principles of the new government that will work for the interests of all citizens and the state in the next four-year mandate," Zaev said at the news conference.

The government will be led by Zaev as PM, who underlined that the main priorities of the new cabinet will include the fight against crime and corruption, vetting of the justice system and speeding up the reforms needed for EU integration.

Other important plans of the new cabinet are to cut the number of employees in the public administration by 20%, to cut spending by government officials and to support low-income families.

Care for the environment and measures against pollution, higher salaries and creating new jobs will also be among the priorities.

One of the main pledges is the adoption of a new election model before the upcoming local elections in 2021.

The current election model has been hugely criticised for not allowing smaller parties to enter the parliament or municipal halls.

Relations between the SDSM and DUI worsened well before the election, with SDSM officials often saying that the DUI should go into opposition until it reforms itself. However, the DUI won an unexpectedly large number of seats the election, which made it unavoidable that it would be part of the new cabinet.

During the election campaign and after the elections, DUI leader Ali Ahmeti had been insisting the new prime minister must be ethnic Albanian, which was one of the stumbling blocks in the negotiations on forming a new cabinet.

Asked by journalists why he abandoned the idea of having an ethnic Albanian PM, he said that the proposal was only a message for Albanians to "take responsibility for a common state”.

“I must admit that Zaev showed a great courage and I welcome the idea that an ethnic Albanian will lead the government in the last 100 days of the mandate,” Ahmeti added.

The main challenges of the new government will include the fight against the coronavirus pandemic, the recovery of the economy and preparing the country for the launch of EU accession talks, which is expected to take place by the end of this year.

The country became a Nato member in March this year, after it solved the long-standing name issue with Greece by adding North to its name.