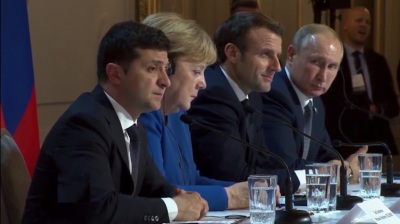 Ukrainian President Volodymyr Zelenskiy (left) secured a ceasefire and an expanded no-contact zone at the Normandy Four meeting in December. In 2020, there is a possibility that some sort of peace deal could be reached with Russia.
By bne IntelliNews January 10, 2020

2020 will be a big year for Ukraine as there is a possibility that some sort of peace deal could be reached with Russia and the effects of the first round of reforms made by the new Ukrainian President Volodymyr Zelenskiy’s administration start to kick in.

The new government was off to a fast start introducing a hectic legislative programme on its first day in office on August 29. Over 500 new laws were tabled with strict deadlines for at least draft versions to be submitted to the Verkhovna Rada in November, December and by January 1. More laws will be tabled during 2020 as Zelenskiy attempts to capitalise on his high popularity to get as many painful reforms through the Rada before his honeymoon is over.

Zelenskiy has two main items on his agenda: bring an end to the fighting in Donbas and raise income levels and kick start economic growth. And he made progress on both fronts in 2H19.

The Normandy Four (N4) process between Ukraine, Russia, France and Germany restarted on December 9 with a meeting in Paris where Zelenskiy, who has no experience in international politics, purported himself well, securing a ceasefire and an expanded no-contact zone and agreeing an all-for-all prisoner swap before the end of 2019.

The new president needed to do two things at his first meeting with Russian President Vladimir Putin: get some sort of concrete results that he can show to the Ukrainian people and not give too much away in concessions to Putin. He managed both.

Among the Russian-aligned prisoners was a Brazilian citizen (Rafael Lusvarghi) fighting with the Russian-backed forces, five former police officers (with the liquidated Berkut special forces unit) suspected in the killings in the EuroMaidan protest of 2014, a suspect (Maksym Mysiak) in the murder of three Kharkiv businessmen in 2013-2014, and three suspects accused of organizing a terrorist attack in Kharkiv in February 2015 that killed four EuroMaidan supporters. Another 300 Ukrainian citizens remain imprisoned in Russia and Donbas, said Valeria Lutkovska, Ukraine’s representative to the humanitarian subgroup of the Trilateral Contact Group.

While the Paris meeting was an encouraging start and showed that both sides are willing to negotiate and make goodwill gestures, the substance of a final peace deal was put off until a second N4 meeting slated for April.

While the talks between Putin and Zelenskiy caught the headlines, it is highly likely that a broader deal was cut between Russia, France, Germany and Ukraine that laid out a road map for removing sanctions. The outgoing US ambassador to Ukraine William Taylor, Jr. speculated in an interview just before New Year’s Eve that a peace deal could be agreed over the next two years. And there is a possibility of some easing of sanctions in the summer of 2020 when the current sanctions regime expires.

At that meeting the tougher nuts need to be cracked: when will control of the border be returned to Kyiv (Zelenskiy: before elections in Donbas; Putin: after elections), changes to the Ukrainian constitution (what sort of special status will be granted to Donbas); an amnesty for everyone involved in the conflict; and the details of the Steinmeier Formula, which is the mechanism that will be used to deescalate the fighting.

By putting these questions Zelenskiy has bought time for his diplomats to work on all these difficult issues. Going up against the Russian diplomatic corps would be a daunting task for any country, but Zelenskiy faces Putin with the weight of the German and French diplomatic corps at his side, which is more than the equal of the Russian service so a deal is possible and even likely.

One of the biggest political issues facing Ukraine was solved in December when Kyiv and Moscow agreed a new gas transit deal. Russia agreed to send 65bcm over Ukraine in 2020 falling to 45bcm after that. This is about half the 90bcm Russia has been sending in recent years. The revenue Ukraine earns from transit will fall from $3bn a year to $2bn. However, as Gazprom intends to increase exports to Europe by 70bcm in the medium term and the new pipeline’s it has built are already fully utilized there is scope for the transit volumes across Ukraine, which can cope with a maximum of 140bcm a year, to grow.

Ukraine transited 87bn cubic metres (bcm) of gas to Europe in 2018 and is on course to send 90bcm in 2019. The combined capacity of Nord Stream 2 and Turkish Stream (aka TurkStream) is 85bcm so Russia needs some Ukraine capacity.

On the economic front things are looking much better. The economy has been stabilised, inflation is falling fast and incomes are starting to rise, albeit from a very low base. If anything the National Bank of Ukraine (NBU) has been too successful with bringing down inflation as the over the course of 2019 the hryvnia strengthened by some 17% making it one of the best performing currencies in the world. By the end of the year the strong hryvnia was starting to hurt exporters and the NBU began to intervene in the market to restrain the currency’s appreciation and the regulator made a series of very big rate cuts, but thanks to the rapid fall in inflation Ukraine still had one of the highest real interest rates in the world.

The falling rates and inflation, and the strong currency, proved irresistible to bond investors who in 2019 were given direct access to the Ukrainian capital market after it was hooked up to Clearstream. Foreign investors poured some $4.5bn into the domestic bond market as a new source of funding became available to the government.

Ukraine’s debt profile changed as the five year delays on Ukraine’s external debt negotiated by former finance minister Natalie Jaresko expired and debt repayment jumped up. But between the $14bn of remittances from workers abroad and the booming domestic debt market, analysts are confident that Ukraine can meet its obligations in the coming years.

The International Monetary Fund (IMF) also signed off on a new $5.5bn Extended Fund Facility (EFF) in December (although this still needs to be approved by the board, which probably won’t happen until February) that will help pay off debt and gives Ukraine access to better terms on the international capital market. The Ministry of Finance raised $4.2bn on the bond markets in 2019 and plans to raise about the same in 2020.

There remains some uncertainty over closing the IMF deal thanks to oligarch Ihor Kolomoisky’s attempts to take back control of PrivatBank that was nationalised in December 2016, but the Zelenskiy administration has made it clear it will do what is necessary to ensure the IMF deal is closed although the wrangling over the terms could well drag on for most of the first quarter of 2020.

This is an excerpt from bne IntelliNews’ Eastern Europe Outlook 2020, covering Russia, Ukraine and Belarus. The full version will be available in pdf format in the coming days.