Poland’s CPI growth shoots above upper range of consensus to 7.7% y/y in November 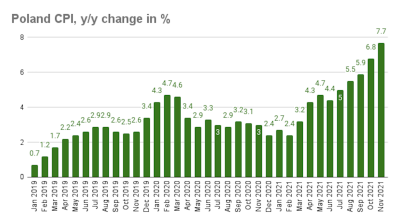 Polish CPI accelerated by 0.9pp to 7.7% y/y in November, the highest point since January 2001, the statistical office GUS said in a flash estimate on November 30.

Price growth continues uninterrupted with the flash reading 0.3pp above the upper end of the consensus range. The November reading sets the scene for the National Bank of Poland (NBP) to raise interest rates for the third time this year during its meeting later this week.

“Today’s inflation data once again put the National Bank of Poland into an uncomfortable situation and given the scale of surprise a move by 75bp in December seems the most likely scenario,” Erste wrote in a comment.

“However, the NBP might argue in favour of a smaller rate hike given the recently presented ‘anti-inflation shield’, risks related to the new coronavirus strain and the expected slowdown of economic activity,” Erste also wrote.

Poland’s interest rates are currently at 1.25% after two hikes since October. The tightening cycle currently underway is expected to halt at 2.5%-3% by mid-2022, analysts predict.

Inflation in November surged on the back of fuel prices picking up growth to 36.6% y/y, following an expansion of 33.9% y/y the preceding month.

Food and non-alcoholic drinks prices also stepped up their annual growth rate, increasing 6.4% y/y in November after adding 4.9% y/y in October. Growth in energy prices picked up to 13.4% y/y in the tenth month after growing 10.2% y/y in September.

Core inflation thus picked up to around 4.7% y/y in the eleventh month from 4.5% y/y in October, analysts estimate.

In monthly terms, the CPI increased 1% in November, the same expansion rate as in the preceding month, the flash estimate also showed. Prices of food and non-alcoholic drinks grew 1.3% m/m, while prices of energy expanded 2.7% on the month. Fuel prices grew 2.2% m/m.

Looking ahead, analyst consensus is for inflation to peak at 8% y/y – 8.5% y/y in December.

“Recent adjustments in commodity prices and the decision by the government reduce the risk of [inflation] breaking the psychological barrier [of 8% y/y],” Poland’s state-controlled PKO BP bank noted.

Still, adds PKO BP, “inflation processes and inflationary pressure will not subside, only will be suppressed by the ‘anti-inflation shield’, which may slightly lower inflation in December and has the potential to reduce it by as much as 1.5pp in January.”

The government’s anti-inflation package is temporary, however, and will push CPI down only in the first quarter.

“The headline figure will return to its original trajectory afterwards … Headline CPI will stay outside of the central bank’s tolerance band throughout next year and we see the CPI moving toward 4.5% y/y by the end of 2022,” Erste said.