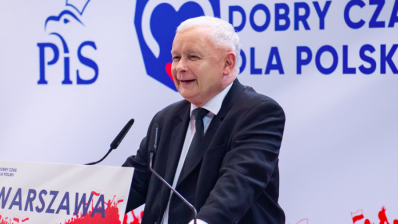 Poland’s ruling party Law and Justice (PiS) won the general election with 43.6% of the vote, enough to hold majority in the lower house of the Polish parliament
By Wojciech Kosc in Warsaw October 14, 2019

Poland’s ruling party Law and Justice (PiS) won the general election, an exit poll showed on October 13. PiS scooped up 43.6% of the vote that should give it another four years with a clear majority in the lower house of the Polish parliament, the Sejm.

Still, the result appears a disappointment for the ruling party, which ran a dynamic campaign, helped by remorseless support of the state-run public television TVP and well-coordinated activity in the internet.

The conservatives promised to build a “Polish version of the welfare state” with generous social transfers, a government investing in big infrastructure projects and – perhaps above all else – a country pushing back at minorities like the LGBT people or migrants, supposedly threatening Polish culture.

With turnout at a near-record breaking 61.1%, PiS clearly increased its voters’ base to nearly 8mn people from about 5.7mn in 2015. But that did not translate into increasing domination in the parliament.

“That is not the final victory yet but we have reasons to be happy,” a somewhat subdued Jaroslaw Kaczynski, PiS’ chairman, told the crowd at the party’s headquarters after exit polls’ results were announced.

PiS’ result would give it 239 MPs in the Sejm – eight above the minimum required for a majority - if the exit poll’s result stands. Centrist Civic Coalition (KO) – a group of parties led by Civic Platform (PO) – won 27.4% and 130 seats.

“We did not feel as if we were taking part in a fair contest. We are going to work uniting the opposition and we promise we will win the presidential election [in spring 2020],” said KO leader Grzegorz Schetyna.

Lewica (the Left), which is returning to the parliament following four years’ of absence, won 11.9% and 43 seats after uniting three competing left-of-centre parties, at times hostile to one another.

“Kaczynski has a problem because there will be a brave opposition in the parliament at last, an opposition that will fight for workers' rights, for a better quality of public services, for decent health care, and for better wages. This is the first step to a leftist government in 2023,” said Adrian Zandberg, one of Lewica’s leaders.

Agrarian party PSL, which ran together with leftovers of the anti-system Kukiz 15 – will have 34 seats in the Sejm after winning 9.6% of the vote. PSL’s result is perhaps the biggest surprise of the exit poll as the party hovered for months barely above the 5% threshold parties need to clear in Poland in order to win seats

The far-right Konfederacja will have 13 MPs, having won 6.4%.

Exit polls are likely to change overnight and on October 14 as actual results will trickle in from polling stations across the country. Konfederacja appears particularly vulnerable of slipping below the 5% threshold needed in Poland for a party to win seats in the parliament.

The freshly minted US President Joe Biden intends to ask Russia for a five-year extension to the crucial START II missile treaty, one of the pillars of the Cold War international security infrastructure that is due to expire in February.