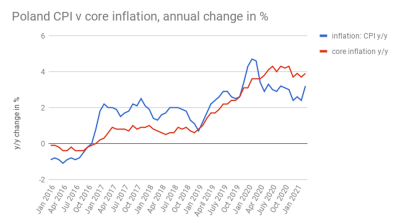 Poland’s core inflation, which measures price growth without food and energy, accelerated 0.2pp to 3.9% y/y in March, the National Bank of Poland (NBP) said on March 16.

The breakdown of the CPI, published by Poland’s stats office GUS the preceding day, showed that the acceleration in the core index was driven by higher prices of communications, including telephone and telefax services, which became 8.3% y/y more expensive in March versus growth of 5.9% y/y in February.

Also, the reading remained influenced by non-market factors such as increases in taxes or administrative fees.

Headline inflation also picked up in March, adding 0.8pp, for the increase to come in at 3.2% y/y. “[Inflation] should accelerate in the second half of 2021, which might complicate the central bank's current rhetoric but we think this is unlikely to impact the MPC’s decision on continued accommodative monetary policy until the end of the term in mid-2022,” according to ING.

“Nevertheless, the noticeable presence of lockdown-related distortion in the pricing data makes the market optimistic about inflation in the medium term,” it added.

The National Bank of Poland lowered rates three times last year to an all-time low of 0.1%. Chances for the rates to change either way are next to none, Glapinski said last month.

“Accelerating core inflation is bad news for the zloty exchange rate as it will shrink Poland’s real interest rate in the face of unchanged monetary policy stance of the central bank,” Capital Economics wrote.

The consensus among analysts is for the CPI to hover around 3% in 2021. The central bank’s inflation target is 2.5%.