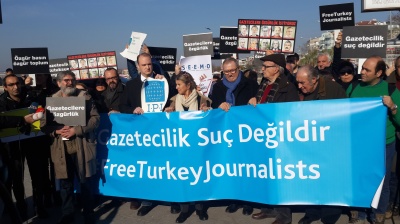 Turkish journalists seen protesting on a human rights day against the jailing of colleagues.
By bne IntelIiNews May 12, 2020

The Committee to Protect Journalists (CPJ) has called on Turkey to revise a financial regulation passed last week that it sees as too broad in scope and containing dangerous ambiguities. The press freedom watchdog wants to ensure that it cannot be used to target media representatives.

On May 7, Turkish authorities—against a backdrop in which officials were scrambling to protect the value of the embattled Turkish lira—ratified a new banking regulation that imposes fines for disseminating information that “would damage the financial system and lead to systemic risks due to the loss of trust in the financial system” or which “keeps the price … [of a] financial instrument at an abnormal or artificial level or that [gives a] false and misleading impression regarding the supply, demand, or price of the same instrument,” according to the text of the regulation, posted in Turkey’s Official Gazette.

Umit Akcay, an economics columnist at news website Gazete Duvar and an associate professor at the Berlin School of Economics and Law, told CPJ via messaging app that the regulation may prompt journalists who cover economic issues to self-censor for fear of being fined.

“The ambiguity in Turkey’s new banking regulations, along with the arbitrary nature of deciding what reports may be harmful to the country’s banking system, threaten independent reporting on the country’s economy,” Gulnoza Said, New York-based CPJ’s Europe and Central Asia program coordinator said on May 11. “Turkish authorities should revise the regulations and ensure that journalists covering matters of economics and finance can do so freely and without fear of retaliation.”

Veysel Ok, a lawyer and co-director of the Media and Law Studies Association, a Turkish nongovernmental advocacy group, was cited as telling CPJ via messaging app that while the regulation does not specifically mention journalists, “the regulation has some open-ended terms, therefore we cannot say that journalists would not be affected with a 100% [certainty].”

Last June, Turkish authorities charged two Bloomberg journalists for allegedly undermining the nation’s economy in their reporting, as CPJ documented at the time. The journalists face up to five years in jail if convicted.

CPJ said it emailed the Turkish treasury and finance counsellor at Turkey’s US embassy for comment, but did not receive any reply.