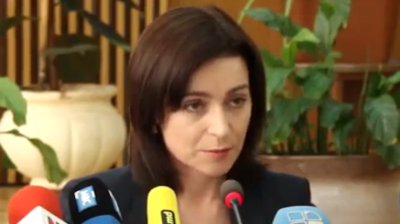 Western oriented PAS leader Maia Sandu says her party is ready to work with the Socialists to "stop a dictator from taking possession of the country".
By bne IntelliNews June 6, 2019

The pro-EU ACUM alliance and pro-Russian Socialists of President Igor Dodon in Moldova are close to forming a ruling coalition aimed at ousting the Democrats led by oligarch Vlad Plahotniuc, one of the parties within ACUM has announced.

If the deal goes ahead, it would be a last-minute agreement, since Dodon is on the verge of calling repeated elections as none of the parties represented in the parliament formed after the February general election have so far been able to form a majority.

Members of the pro-EU Action and Solidarity Party (PAS) national political council voted almost unanimously to support a parliament speaker nominated by the Socialist Party (PSRM) in exchange for appointing its own prime minister, claiming that it has thus removed the main obstacle to a ruling agreement with Dodon’s party.

“Today, the PAS national political council … has taken a difficult decision to unblock the current political situation and give Moldova a legitimate and democratic government,” the party said in a statement on June 5.

It talked of backing a speaker proposed by the PSRM with the aim of “de-oligarching” the country and liberating captive institutions”. Moldova is increasingly considered a "captured state" as Plahotnuic extends his control over institutions including the judiciary.

“The decision is not based on trust and partnership with the socialists, the decision is only feasible to stop a dictator from taking possession of the country for the next 10 years, at least,” the PAS statement read.

“We hope this decision will be shared by our partners in ACUM … We reiterate that all the decisions we will take will only be in the interest of liberating citizens from terror and misery.”

PAS leader Maia Sandu confirmed that an internal survey, aimed at deciding whether to go ahead with the partnership with the Socialists, has been carried out among PAS members. The decision was taken by a vote of members of the party’s political council, but also based on this internal poll, in which PAS members opted for the scenario. Notably, out of the 47 members of the political council, only one rejected the idea.

It’s not certain that the agreement will be sealed, however. It is still pending approval from the Dignity and Truth party (PPDA), the other member of the ACUM alliance, and the official seal from the Socialists’ de facto head Dodon. Furthermore, it is not clear how a coalition with such opposite political orientations would function.

The PSRM saluted the decision on a reserved note, but stressed that the other half of ACUM must endorse the deal. Other requirements might be added to the deal as well.

Early elections cannot be entirely excluded — on the contrary, as there are reasons for Dodon to invalidate the Socialists’ preliminary agreement and call snap elections: failure to reach the agreement announced by PAS as nearly done would leave the pro-EU coalition with a handicap ahead of the new electoral campaign and possibly increase the tensions between the pro-EU parties. This would benefit the Socialists, who expected to win a outright majority in parliament in the February 24 election, and perhaps would see supporting a pro-EU prime minister — particularly Sandu — as a major failure.

The PPDA would need to endorse the agreement as well if a parliamentary majority is to be reached. It has summoned a meeting on this topic for June 6. Beside objecting to an alliance with the Socialists, other threats to reaching an agreement would be the rivalry between their leaders, Sanduand the PPDA’s Andrei Nastase, and between the two parties in general.

Furthermore, the agreement needs approval from Dodon, who has left the country to meet Russia’s President Vladimir Putin for the second time in less than two weeks. Reportedly, the Russian authorities would support such an alliance, while advising strongly against an alliance between the Socialists and Plahotniuc’s Democrats.

The labour shortages that have threatened to limit economic expansion in Central and some parts of Southeast Europe have started to ease in some countries, with increased labour migration a contributing factor.

Ukraine’s domestic bond market got off to a strong start in 2020 as heavy bidding at the weekly auction on January 22 depressed yields to 10%. A year ago Ukraine bonds were yielding 19%.

Any potential investor who invests more than $100mn in Ukraine, will get a personal "guardian" from the government, according to President Volodymyr Zelenskiy, who is at the Davos conference to talk up Ukraine’s investment case.