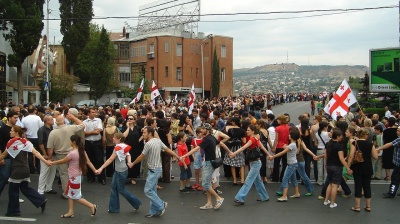 A human chain demonstration in Tbilisi against Russian influence in Georgia's affairs. / Kober.
By Iulian Ernst in Bucharest September 23, 2019

The Georgian public’s perception of the direction their country is taking is at its most negative since 2010, according to a survey commissioned by the National Democratic Institute (NDI) from its local partner Caucasus Resource Research Centers (CRRC).

The number of respondents who said that they thought Georgia was going in the wrong direction increased to 49% in the survey, conducted between July 13 and July 29, from 38% in December 2018. A total of 18% of respondents said they believed Georgia was moving in the right direction. That marked a 7pp decrease compared to the survey at the end of last year. Those who perceived no change amounted to 30% of respondents.

“I have a reason not to trust the NDI surveys, especially the political part,” mayor of capital city Tbilisi Kakha Kaladze told reporters when discussing the results. Kaladze, a top politician in ruling party Georgian Dream, is one of the most trusted politicians in Georgia, according to the survey.

Other politicians blamed NDI’s local partner for the portrayed sentiment, with the results coming as Georgia approaches the general election year of 2020.

“I would like to reiterate our respect for institutions such as NDI, IRI and other such institutions. However, unfortunately, over the years we have been able to see that their Georgian partners conducting these surveys do not always accurately reflect the real sentiments on the ground,” said Deputy Prime Minister, Minister of Regional Development and Infrastructure Maia Tskitishvili.

As for political preferences, Georgian Dream seems to enjoy relatively strong support, compared to other parties, while trust in political parties in general plummeted.

A total of 45% of respondents said that none of the parties was closest to them, an 8% increase compared to the April 2019 survey. Six percent of respondents noted that they did not support any party and 4% declined to answer the question.

According to the survey, Georgian Dream-Democratic Georgia (GDDG) enjoyed the strongest public support with 19% of respondents identifying GDDG as “the party closest” to them against 21% and 27% of respondents in the April 2019 and December 2018 surveys, respectively.

Separately, Mikheil Saakashvili’s UNM, its more moderate ally European Georgia and entrepreneur Mamuka Khazaradze’s newly founded Lelo Public Movement attended protest rallies in proximity to the residence of President Salome Zurabishvili and in front of the parliament building on September 20—the demonstrations came three months after similar protests against the government were aggressively dispersed by riot police, with incidences of protesters losing eyes amid hails of rubber bullets.

Protesters in front of parliament displayed ‘red cards’ aimed at Georgian Dream. As the organisers of the rally stated, the cards underlined the desire for oligarch and ex-PM Bidzina Ivanishvili’s party to leave the field.

"We’re also showing red cards to Ivanishvili because we are against the government. We’re showing Ivanishvili a red card for things to end here," the organizers said.

Among the protesters was TBC Bank co-founder and backer of the Anaklia deep-water port flagship infrastructure project, Khazaradze, who, facing pressure from the authorities, is now a political activist as well.

“I am not going to cooperate with Mikheil Saakashvili,” Khazaradze, pushing his Lelo Public Movement, told reporters outside parliament when asked if he would work with the former president, who is self-exiled in Ukraine.

Khazaradze earlier made a speech in which he said that the June 20 police action amounted to a watershed moment that prompted him to decide to come out and join the protesters.