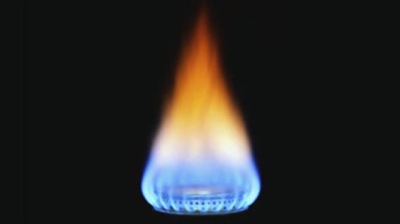 Europe has been threatening to cut off Russian gas deliveries, but Putin strikes first by demanding ruble only payment terms. / wiki
By bne IntelliNews March 24, 2022

Russia’s President Vladimir Putin has announced that “unfriendly” countries will have to pay for gas in Russian rubles and requested that the central bank prepare the necessary conditions for enacting this within seven days, while Gazprom natural gas giant is revising the export contracts accordingly.

Previously Putin railed against Western sanctions on the central bank reserves, and Interfax quoted him as saying that “there is no point anymore to supply our commodities to the EU and the US and get payments in dollars, euros [or] some other currencies”.

The move appears to be an effort to apply pressure to Western countries by forcing foreign buyers of Russian gas to use rubles, with the added benefit of supporting the value of the currency, Capital Economics commented on March 23. Shortly after Putin’s announcement, the ruble appreciated by about 5% to US dollar to RUB90 before retreating again to back over RUB100.

Russian gas accounts for some 40% of Europe’s total consumption and EU gas imports from Russia have fluctuated between €200mn to €800mn a day so far this year. Russia’s gas exports to Europe are worth some €30bn a year and Germany alone has already paid some €4bn to Russia for gas exports since the attack on Ukraine on February 24. Ukraine’s supporters complain that the EU is funding Russia’s war in Ukraine with these gas payments and are demanding a boycott.

For its part the Kremlin has been at pains to show it is a “reliable supplier” of energy and continues to supply gas to Europe in accordance with the letter of its existing contracts. The flow of gas via Ukraine has even increased despite the outbreak of the war and, as bne IntelliNews reported, the existing storage and pipeline infrastructure remains largely  outside the current conflict zones.

European governments and energy companies were scrambling to understand what the order will mean for gas imports. Gas prices on the Dutch TTF hub where most of Europe gas is traded spiked by 15% on the news as traders anticipated a new crisis in gas supplies to Europe.

The EU recently called for storage tanks to be refilled ahead of winter to 80% from their current record low levels of circa 27% full. To achieve that Europe would have to import more gas than usual this year. Supplies of gas to Europe are currently running at contractual maximum, with a significant part of that running through the warzone in Ukraine. 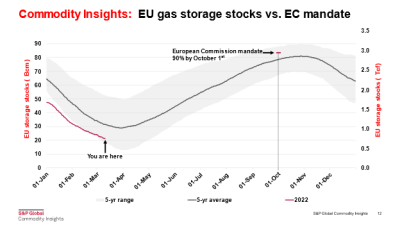 It is not clear how Gazprom would be able to unilaterally revise the contracts or force the payments in rubles without constituting a breach of payment conditions.

The Polish government has already said that it will refuse to pay for gas in rubles as it was a breach of contract, adding that it has “no intention” of renewing its gas supply contracts with Russia when they expire at the end of this year.

According to Reuters, 58% of Gazprom’s sales of natural gas to Europe and other countries as of January 27 were settled in euros. US dollars accounted for about 39% of gross sales and pound sterling around 3%. None of  the existing contracts have provision for payment in rubles.

The analysts surveyed by RBC daily also believe that imposing the ruble as means of payment for gas will not have any serious long-term impact on the ruble exchange rate or economic benefits.

Currently Gazprom is obliged to sell 80% of its forex revenues on the market, as are other exporters under emergency currency controls. Receiving rubles directly would undermine this source of hard currency. However, potentially this could help shield forex gas revenues and Gazprom from sanctions.

Elina Ribakova, deputy chief economist with the Institute of International Finance (IIF), commented that the ruble-only rule will help the CBR enforce its foreign exchange surrender requirements and effectively increase the  amount from 80% to 100%.

The move: “1. steps up surrender of export proceeds to 100% from 80%. 2. Outsources and improves compliance with capital controls. 3. Makes it harder to trace an escrow account of oil for food scheme. 4. Pre-empts the move from the EU & US, we "disconnected you first",” Ribakova said in a tweet.

Russia watcher Alex Nice raised the question of if the new rule is also partly designed to crack down on compliance with the surrender requirements by state-owned companies that have been trying to avoid it as, “the Central Bank is not always able to get big exporters like Gazprom to comply with capital controls? Certainly this, like recent decree on CB deciding FX for imports, gives more power to central bank,” Nice said in a tweet.

Nevertheless, analysts also believe that the rule would be hard to impose and can potentially be contested in the arbitration courts. In the longer term, such rules would speed up diversification away from Russian gas.

The Kremlin has been pushing very hard to persuade Europe to sign more long-term contracts to buy Russian gas as some 70% of its gas exports go to Europe, but as part of its Green Deal the EU has been trying to diversify way from hydrocarbons and replace them with renewables. At the same time the giant reserves in Russia’s Arctic Yamal complex are mainly targeting Europe through the Nord Stream pipelines and currently have no other market. Plans to build a 3,000km pipeline connecting the Yamal fields to the Power of Siberia pipeline that serves China remain a blueprint only at this stage.

Russia’s aspiration to sell more gas to Europe under contract will almost certainly be dashed by the latest row as Russia openly uses gas as a geopolitical weapon, arguably for the first time.

The head of the German industry association Zukunft Gas has already said that Putin's statement has left the German gas industry "bewildered", according to The Bell. The head of Austria's OMV said his company would continue paying for Russian gas in euros because "there is no other contractual basis".

“There are a number of questions about what this means for exports. President Putin explained that Russia will continue to supply gas in accordance with the terms of existing contracts, but the German Economy Minister has argued that any demand to pay for gas in rubles would represent a breach of contract,” Capital Economics wrote.

The measures taken by Russia may also be interpreted as provocative and may increase the possibility that Western nations tighten sanctions on Russian energy, the analysts at Capital Economics wrote.

Both the EU and the US are due to release a fifth round of sanctions on Russia on March 24 to close loopholes in the previous rounds of sanctions and tighten the economic noose around Russia’s neck. Previous rounds have focused on Russia’s primary business but the new sanctions are expected to impose secondary sanctions to prevent things like currency swap deals that allow Russia to avoid the worst of the sanctions regime by turning to its friends such as China for help.

In addition, Capital Economics warns that even should Russia switch the $30-40bn annual gas exports to the EU to rubles, this would eliminate a source of foreign currency at a time when export revenues have been hit hard by sanctions.

“This in turn would intensify pressure on Russia’s balance of payments and accelerate the pace of import compression (and the necessary squeeze on domestic demand). The longer-term implication is that it accelerates Russia’s strategy of de-dollarisation and reinforces the idea that Russia will continue to drift towards autarky,” Capital Economics wrote.