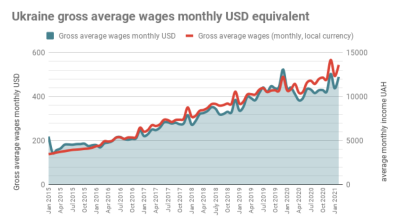 “The growth of real wages accelerated significantly in March even despite increasing inflation. Apparently, the improvement in industrial production prompted the wage growth,” Evgeniya Akhtyrko of Concorde Capital said in a note. “We expect real wages will rise 8-9% y/y in 2021. The growth of wages will be boosted by economic revival and rising demand for labour.”

ING: Inflation pressure continues to build in Poland
16 minutes ago
Russians Services PMI remains a strong 55.2 in April but slowed a little from March, optimism for the rest of the year high
16 hours ago
Bucharest Stock Exchange up 15.7% ytd despite modest performance in April
1 day ago
DATACRUNCH: Ukraine starts to close the gap with Russia
2 days ago
April PMI shows Covid resurgence undercut Turkish manufacturing
2 days ago