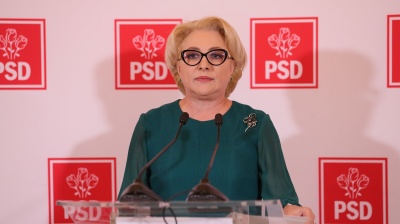 Romania’s Constitutional Court ruled in favour of Prime Minister Viorica Dancila on September 18, deciding that President Klaus Iohannis should accept the nominations for interim ministers she has sent to him.

This gives Dancila a 45-day grace period (the lifetime of interim ministers), or even more since Iohannis has not yet appointed the interim ministers, to re-gain the majority in parliament she lost when the junior ruling Alliance of Liberals and Democrats (Alde) pulled out of the coalition with her Social Democratic Party (PSD). Some Alde MPs have already defected to support the PSD.

In the meantime, the opposition hopes to get majority support for a no-confidence vote against the government. The negotiations continue but the main opposition party, the National Liberal Party (PNL), has deferred the motion until the end of next week as not enough support was confirmed.

The Constitutional Court also ruled that the president should dismiss Justice Minister Ana Birchall, as requested by Dancila.

However, the Constitutional Court’s ruling does not allow Dancila to appoint proper ministers without a vote in parliament. It refers only to the nomination of interim ministers and dismissal requests, which, the court says, are not among the president’s prerogatives. The appointment of proper ministers still requires a vote in parliament —  something Dancila will avoid as long as possible (namely for the 45-day term of the interim ministers).

The government's notification regarding a possible constitutional conflict with the presidency was registered with the Constitutional Court on September 5, after Iohannis refused to appoint interim replacements for the three Alde ministers who pulled out of the ruling coalition. Ministers Viorel Ilie (liaison with parliament), Graţiela Gavrilescu (environment) and Anton Anton (energy) resigned on August 27, following the decision of Alde leader Calin Popescu-Tariceanu to pull his party out of the government.

Iohannis said in a statement on September 18 that the Constitutional Court’s decision does not change the political situation and stressed that Dancila still has to go to the parliament to appoint new ministers.

“The first observation I would make: the Constitutional Court’s decision does not change the political situation that the Romanian government has been experiencing for more than three weeks. The government does not have the same [political] composition, after Alde pulled out. The prime minister must go to the parliament to request a vote of confidence,” said Iohannis, in a press statement at the Cotroceni Palace.

Iohannis was referring to a vote of confidence for the whole government, while Dancila accepts she needs lawmakers’ endorsement but says this is only needed for the new ministers. She stresses that failure to get it would not result in the overthrow of her government.

Meanwhile, the PNL has decided to submit a no-confidence motion against the government to the parliament next Friday, September 27, sources within the party's leadership told G4Media.ro.

According to sources within PNL, MPs of Save Romania Union (USR), Popular Movement (PMP) formed by former president Traian Basescu, the Democratic Alliance of Hungarians in Romania (UDMR), Pro Romania of former prime minister Victor Ponta and the MPs representing ethnic minorities have signed the motion. "So far, we have collected over 210 signatures. We should have a minimum of 233 [which is a majority of lawmakers] when submitting the motion,” explained one of the PNL leaders.