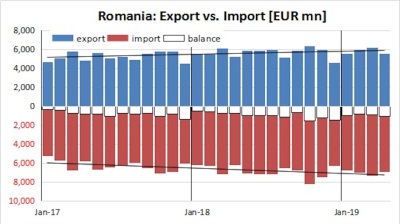 Romania’s April foreign trade figures show imports strengthened by double digits again (+10.6% y/y, from +7.5% y/y in Q1), rising twice as fast as exports, and pushing the trade gap (net import of goods) up by 36% y/y in the month.

The deficit in January-April already hit €5bn, €1.3bn more than in the same period last year, making the external balance one of the key risks to macroeconomic stability. Furthermore, net export of services, typically offsetting part of the net import of goods, showed signs of fatigue (-5.7% y/y in Q1) while the inflow of funds from the European Union remains a largely untapped resource despite certain improvements in Q1 (inflows under the secondary income account increased by 58% y/y to €1.4bn).

Notably, detailed Q1 data revealed last week points to the massive use of external resources: over 4% of the GDP (the resources created locally, by the local economy). It was the second quarter in a row when net imports amounted to more than 4% of GDP. Historically, such values are not the highest: imports reached more than 10% of GDP immediately after the current account liberalisation (2005-2008) when FDI was particularly robust and the local currency strengthened, and also in 2009-2012 when the government borrowed some €20bn to fix macrostability issues. But the trade balance has improved over the past six years and it remains unclear what inflows would support rising consumption of external resources this time. The transfer of funds from the European Union's budget under structural and cohesion programmes could account for such inflows, but they remain at moderate rates so far except for the direct payments in agriculture.

The widening external deficit has been spotted as a risk by both the central bank (BNR) and the International Monetary Fund (IMF), but their recommended approaches to dealing with this issue differ. While the central bank defends the nominal exchange rate (and hence the gradual real strengthening of local currency given the wide inflation differential) and focuses on structural reforms and productivity gains that are more feasible in the medium- and long-term, the IMF sees benefits from a higher exchange rate flexibility and looks at short-term solutions.