Russia demand expands in May, albeit slowly, labour force shrinks 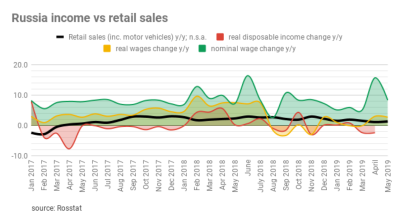 Russia’s economy is growing, albeit slow, VTB Capital (VTBC) said in a note following the release of May’s statistics by Rosstat.

The first tier data for May shows that retail sales were up +1.4% y/y, with the turnover in the food and non-food segments increasing modestly +1.7% y/y and +1.0% y/y, respectively.

Real wages have been stagnating for almost six years now and real wages growth decelerated again from +3.1% y/y in April to +2.8% y/y in May. However, economist warn that these flash estimates tend to be revised.

And despite a surge in completion in the residential sector, up by almost 30% in the first quarter, the output in construction remained almost flat in May 0.2% year-on-year, according to Alexander Isakov, chief economist at VTB Capital.

“Nonetheless, as we mentioned in our Output & Demand - April; demand remained subdued, of 27 May, we see the tailwinds from construction-related production growth boosting output in the sector,” said Isakov.

The stagnation in real wage growth has been depressing the retail sector where turnover grew +1.4% y/y in May, up slightly from the +1.2% y/y in the previous month.

“The lacklustre growth reflects disposable income growth being down -2.3% y/y in 1Q19 (the last value available). This anemic demand growth is likely to persist throughout the year, we believe, as long as the 2018 base effects are at play (higher inflation, no extra-public sector wage indexations etc.)” said Isakov.

Real wages are rising, but too slowly as with economic growth of only 0.5% in the first quarter year-on-year there is little momentum in the economy. Real wages increased +2.8% y/y in May, while the growth in April was revised up from the flash estimate of +1.6% y/y to +3.1% y/y.

“We note that personal income tax revenues have been growing faster than the average nominal wage recently. In April, the former grew +15.8% y/y, while the latter added +8.4% year-on-year,” says Isakov.

Construction output, one of the three main drivers of economic growth, remained stagnated at +0.2% y/y in May; the maximum growth rate registered this year was +0.3% y/y, in February.

The unemployment rate remains depressed at historic lows and decreased again from +4.7% in April to +4.5% in May.

Rosstat’s latest labour market survey, which is based on the methodology of the International Labour Organization (ILO), finds that the employed population (aged 15−72 years) fell by about 1% y/y in the first quarter of this year. The contraction in the number of unemployed is now in its third year, reports Bank of Finland Institute for Economies in Transition (BOFIT).

The size of Russia’s total labour force, which includes both employed and unemployed workers, witnessed an unusually large decline this year. At the same time, the number of persons outside the labour force increased. The increase is due almost entirely to the over 1mn persons in potential labour force, i.e. not actively seeking work, but who would like to have a job.