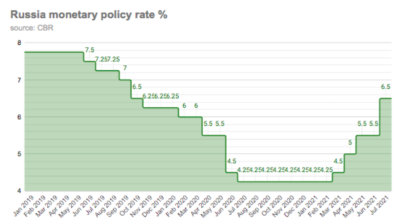 The Central Bank of Russia raised its key rate by 100 basis points to 6.50% per annum on July 23. The rate increase, made amid inflation that is considerably above target, was expected by the market.

A statement from the CBR said the decision was based on the updated macroeconomic forecast, which has been significantly revised.

“The growth of the Russian economy sped up in the second quarter, and inflationary pressure turned out to be higher and more persistent than forecast. Some sectors are already demonstrating signs of overheating,” said CBR governor Elvira Nabiullina, following a meeting of the bank’s board of directors.

According to Nabiullina, the rate increase is needed to bring inflation back to the target. Inflation reached 6.5% in annualised terms on July 29, which is considerably above target and close to five-year peaks. The steepest price increases in the second quarter of 2021 were for construction materials, furniture and cars.

In addition, inflation expectations have risen; the CBR has revised its inflation forecast upwards by one point to 5.7-6.2% for this year. After that, the CBR expects inflation to slow down to 4.0-4.5% in 2022 and remain close to 4%.

Nabiullina also noted that according to CBR estimates, economic growth sped up in Q2, with high-frequency indicators showing that the economy has bounced back to  pre-crisis levels.

“The decision was motivated by a faster-than-expected rebound in the Russian economy (CBR expects a growth of 4-4.5% y/y in 2021) combined with disruptions in global supply chains and imbalances in the labour market,” Zaigrin wrote.

“As a result, inflation is expected to remain higher for longer, with the YE21 CPI forecast revised by 1ppt. Inflation is expected to return to c. 4% by YE22 or in early 2023. The tone of CBR’s statement was calmer, and it pointed to the possibility of the policy being fine-tuned by 25-50bps, which could occur without any revisions to forecasts. Given the possible issues with harvests and new strains of COVID-19, which could lead to supply disruptions lasting longer than expected, we expect a 25bps fine-tuning of the policy sometime in September or 4Q,” he added.

RenCap analysts said that raise was above its forecast and at the upper end of market expectations. “The rate is now at the level we saw before the pandemic and above the long-term neutral range. This is due to the fact that the central bank is extremely concerned about the unrelenting inflationary pressure,” RenCap analysts wrote.

RenCap maintains its forecasts for the rate to be at 7.0% at the end of this year, falling to 5.75% at the end of 2022. “In our opinion, inflation will be below the expectations of the Central Bank and fall to less than 3% over the next 12 months, thanks to easing pressures from domestic demand and import prices," analysts said.

Meanwhile, monetary conditions “have been progressively adjusting to the earlier increases in the key rate, but are still accommodative,” the central bank governor said. RenCap's note commented: "tightening monetary policy should support the ruble: we expect it to strengthen to 70.1 / $ by the end of 2021 (from the current level of RUB73.6 / $)."

The CBR’s rate increase comes a day after the National Bank of Ukraine (NBU) raised its main interest rate from 7.5% to 8%. The rate hike was the third this year and NBU governor Kyrylo Shevchenko said another increase to 8.5% is planned this year as the central bank seeks to rein in inflation.