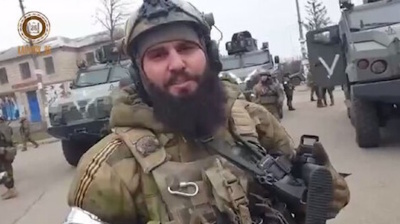 Husein Mezhidov heads a battalion of the Special Rapid Response Forces of the Chechen Republic, one of the top units under Ramzan Kadyrov’s command. His troops have been heavily engaged in battles in the suburbs of Irpin and Bucha for over a week.
By Neil Hauer in Lviv March 8, 2022

Russia’s offensive in Ukraine continues to grind on. As the war nears the end of its second week, the initial blitzkrieg Moscow hoped to pull off is turning into a more conventional mode of warfare. Russian armoured formations continue to make progress in Ukraine’s south, but in the country’s north and east, Russian progress has been bogged down by heavy urban warfare around the cities of Kyiv and Kharkiv.

That kind of fighting entails heavy casualties: Ukraine claims to have killed upwards of 10,000 Russian soldiers by now, while Russia itself has admitted nearly 500 dead (the real answer almost certainly lies between those two figures).

Russian President Vladimir Putin, meanwhile, has insisted that the war will not halt any time soon, and has continued to issue maximalist demands that hint at only greater fighting to come.

In this environment, the Kremlin has need of soldiers that will not baulk from a fight, and whose deaths are likely to provoke less opprobrium from the Russian public than the conscript soldiers now secretly dying on the front. Enter Ramzan Kadyrov, the brutal, mercurial ruler of Chechnya, and his personal army.

Kadyrov has ruled Chechnya ruthlessly for the past 18 years. At the start of the Second Chechen War in 1999, his father, Akhmad Kadyrov, former grand mufti of the separatist Chechen Republic of Ichkeria, went over to the Russian side in exchange for leadership of the newly recaptured Chechnya.

Following the elder Kadyrov’s assassination in 2004, Ramzan rose to power and has set about brutally pacifying the republic. He has struck with Putin the ultimate Faustian bargain: so long as he maintains peace in Chechnya by any means, Kadyrov will be given a free hand to rule the republic as he sees fit, with generous subsidies to buy the loyalty of security forces and engage in any number of prestige projects.

In recent years, Kadyrov has come to serve increasingly as a tool of Russian foreign policy in select spheres, including security issues. Kadyrov’s personal army, the Kadyrovtsy, sent soldiers to participate in Russia’s 2008 war with Georgia and committed some of the worst crimes of the war, including burning and depopulating dozens of ethnic Georgian villages.

Chechen troops have been deployed to Syria in batches for years, forming a contingent of military police that has helped the Kremlin quell dissent in recently pacified areas. Kadyrov’s forces have also spent plenty of time training with Arab counter-terrorist forces in countries ranging from Jordan to Bahrain and Saudi Arabia.

In the current offensive, the Kadyrovtsy have been employed in a leading assault role. They have been particularly involved in the fighting west of Kyiv, near Hostomel Airport, which was attacked by Russian paratroopers on the first day of the war and has since become a major battleground on the capital’s western approaches.

Open source investigators have identified and geolocated videos of one Kadyrov commander, Husein Mezhidov, operating in the area. Mezhidov heads a battalion of the Special Rapid Response Forces (SOBR) of the Chechen Republic, one of the top units under Kadyrov’s command.

His troops have been heavily engaged in battles in the suburbs of Irpin and Bucha for over a week, with some reports that Mezhidov himself was even killed in the fighting. Another top Kadyrovtsy commander, Anzor Bisaev of the Grozny OMON (riot police) detachment, has also been seen extensively in the area.

Other reports suggest, meanwhile, that the new recruits being gathered are hardly well motivated participants, and instead are more like press-ganged conscripts.

One local source in Grozny, who attended the mass recruitment rally on February 25 and spoke to several participants, gave his insight on their condition.

“I didn’t see much enthusiasm in their eyes, and I don’t think that they’re very happy to go [to Ukraine],” said the Grozny local, who cannot be named for security reasons. “I don’t think they’re well trained, because many of them were very young. [Most of] those who have military experience are now already quite old,” he said.

The material incentives for these recruits are not high, either.

“Chechen soldiers are regularly underpaid or not paid at all,” said the Grozny source. “Quite a few Chechens who fought in Syria [for Russia/Kadyrov] were not paid. Their salaries are being depreciated constantly, and inflation is significant. Their families [have to] pay for their food more and more,” he said.

Escaping military service in Kadyrov’s Chechnya, meanwhile, is extremely difficult, if not impossible.

“One [serviceman] I talked to said that if he wanted to resign, he had to submit his resignation tender,” said the Grozny source. “But his superior would not accept it. If the guy then tried to quit without this, he would be prosecuted as AWOL [away without leave] and would be sent to prison,” he said.

And the soldiers themselves become financially tied to the Kadyrov government.

“Before [they begin their service], Kadyrov’s officials would make them sign loan papers in the bank,” said the Grozny source of the Chechen recruits. “Of course, these guys would not get those loans, but they would have to pay the amounts they signed for. So even if they wanted to try and leave, they would have no money [to repay the fake loans],” the source said.

The implications for Ukrainian civilians, meanwhile, if they should come face to face with Kadyrov’s forces are bleak. Unlike regular Russian soldiers, who have thus far proved unwilling to open fire on Ukrainian demonstrators, Kadyrov’s troops would likely have few such qualms.

Kadyrov’s regime in Chechnya stands out for its cruelty even in comparison to the autocratic rule of his superior, Putin. The Chechen leader’s foot soldiers have not only crushed any resistance within the republic, they increasingly operate outside it: Chechen security services have been linked to the murder of critics abroad in Turkey, the UAE, France, Germany and Austria in recent years.

Within Russia as well, Kadyrov’s men operate with impunity, recently dragging the mother of one critic (whom they could not find) from the city of Nizhniy Novgorod all the way back to Grozny, some 1,800 km away. That was followed by top Chechen officials stating just weeks ago that they would literally decapitate any of those who dared to go against them, whether in Grozny, Moscow or elsewhere.

Meanwhile, their deployment poses risks for the regime back in Grozny itself. Some reports suggest that Kadyrov and other elements of his leadership, including the number two and three in the regime, Duma deputy Adam Delimkhanov and Chechen parliament speaker Magomed Daudov, have quietly sent their families to Dubai, in possible anticipation of increased unrest in Chechnya.

Three of Kadyrov’s sons, meanwhile, have appeared at a rally in Grozny claiming that they will deploy to Ukraine and “capture every building there, one after the other.” Given that the boy making these claims, Adam, is all of 14 years old, it seems unlikely that such a deployment will actually occur, but it does demonstrate how important the Ukrainian war has become for Kadyrov’s regime.

Missiles or sabotage: What caused the explosion at the Russian airbase in Crimea?
2 days ago
Czech government remains colour blind on green issues
3 days ago
Poland ups the ante in feud with Brussels over judiciary reforms
3 days ago
What's the current outlook for Belarus' export sector?
4 days ago
Russian gas exports to Europe tumble in June
4 days ago