Russia’s Economic Ministry upgrades 2021 growth forecast to 3.8% as the economy continues a strong bounce back 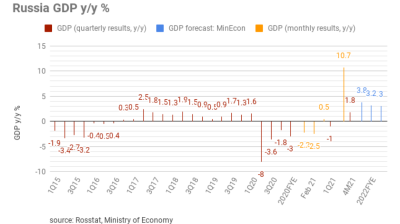 Russia's Economy Ministry added almost a full percentage point to its GDP growth forecast after reviewing the April-May data that was better than expectations
By bne IntelliNews July 12, 2021

Russia’s Economic Development Ministry has upgraded its growth forecast for this year to 3.8% from 2.8%, the ministry said on July 9.

“The estimate for Russia’s 2021 GDP growth is 3.8% against 2.9%. The reason for the increase of the GDP forecast for 2021 is better dynamics of consumer and investment demand,” a spokesperson for the ministry told reporters.

Russia’s economy had a mild recession in 2020 (3% contraction) and has bounced back in the first quarter of this year much more strongly than expected.

Russia’s seasonally adjusted IHS Markit Russia Services Business Activity Index registered 56.5 in June, down from 57.5 in May, but still well above the 50 no-change mark, as services continue to recover from last year’s annus horribilis. The manufacturing PMI contracted slightly in June, but over all business is still growing strongly.

Russia’s labour market further extended its gains in May, as unemployment declined to 4.9% and industrial production soared in May by 11.8% from 7.6% in April, which was also revised up from the previous result of 7.2%, Rosstat said on June 24.

The economy is on the mend and will return to the pre-crisis level in July, the spokesperson said.

“Our old scenario conditions was formed in March on the basis of data for January–February, but now we have the data for March–May, and we see that the economy is recovering faster than we expected. The May GDP was 0.3% below the pre-pandemic level of the fourth quarter of 2019. We expect achievement of the pre-crisis level already this month,” the person said.

Russia has not yet exhausted potential for economic recovery demonstrated by a 2% year-on-year rise in fixed capital investment in January–March. The key operating indicators for April–May signal very robust performance of investment in April–May, the spokesperson added as cited by Prime.

The ministry also raised its expectations of 2021 inflation to 5% from 4.3%, but the forecast for the next three years remains at 4%.

Inflation remains the main problem, which surged to 6.5% in May and could go higher, the Central Bank of Russia (CBR) said. The regulator has already hiked rates three times this year – March (25bp), April (50bp)  and June (50bp) – and is widely expected to hike again at the July meeting, possibly by as much as a full 100bp.

Low levels of investment are another problem holding back growth. Russia fixed capital formation is running at 20%, when it needs to be at least 25% to create sustained economic growth and remains behind the 30% that many Central European countries have maintained for years.

The ministry maintained its estimate for Russians’ real disposable income growth this year at 3%, while the forecast for real wages increase was raised to 3.2% from 2% due to a faster than expected recovery of the labour market.