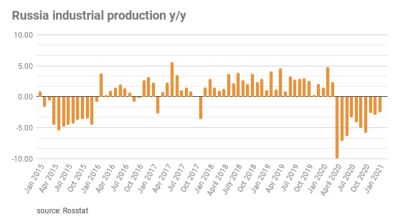 “The data was significantly below consensus (-0.4% y/y) and our expectations (0%) and looked like a major reversal from the revised 2.1% y/y growth estimate recorded in December. However, the prime factor that contributed to such a change was the calendar factor in what is the shortest working month of the year – in January 2021, there were only 15 working days vs 17 days a year ago," BCS Global Markets said in a note.

Crude oil production is still the main drag on growth, as prices remain volatile despite the recent rise to over $60 a barrel. Detailed data on industrial performance in January shows that the oil industry was by far the largest laggard: its output was down 9.8% y/y, which led to a 7.1% y/y contraction in the mining industry, despite 5.7% y/y growth in natural gas output and a 6.7% rise in coal production, reports BCS GM.

Despite the negative calendar factor, the manufacturing sector posted a modest decline of 1% y/y, while output in utilities jumped 7.3% y/y, helped by cold weather.

Statistics on the production of major industrial goods and services shows continued growth in many segments – automotive, consumer, pharmaceuticals, chemicals, etc. In key categories, the largest declines in January were seen in crude oil, refining and metallurgy, BCS GM reports.

“Good news, despite an uninspiring headline number. Overall, the latest industrial data has shown that, fundamentally, Russian industry remains on the recovery path, even despite the negative surprise delivered by the headline number. The recovery is driven by the manufacturing industry, while the oil sector is still the major drag on gross output. After the recent spike in oil prices, chances are high that existing caps on oil production will be removed soon – this will have an immediate and strong positive effect on the industrial and macro dynamic in the economy. We reiterate our estimate for industrial growth in 2021 at 5% y/y,” according to BCS GM’s chief economist Vladimir Tikhomirov