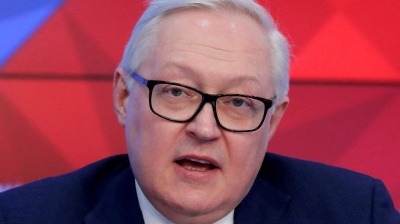 Russian Deputy Foreign Minister Sergei Ryabkov said no progress has been made in talks with the US over thrashing out a new pan-European security deal. / wiki
By Ben Aris in Berlin January 10, 2022

No progress was made at the first day of the Russo-US talks demanded by Russian President Vladimir Putin to thrash out a new security deal and get legal guarantees of no more expansion of Nato, and especially of Ukraine’s inclusion in the military alliance, according to the Russian side.

Russian Deputy Foreign Minister Sergei Ryabkov led the Russian delegation that met with his counterpart US Deputy Secretary Wendy Sherman to begin a week of talks.

Russia has forced the negotiations onto the table after it built up military forces in bases facing Ukraine in the Western and Southern Military districts, causing alarm in Washington, who in turn warned off a possible imminent Russian invasion.

At a press conference following the day of talks Ryabkov played down the threat of an invasion, repeating that was never Russia’s intention.

“I read in the NYT today Peter Baker, who said that “Russia wants to trade its threat against Ukraine for more flex in talks with West.” This not case, as we have no intentions to invade Ukraine and so there is nothing to trade with Ukraine,” said Ryabkov answering a question from the New York Times’ correspondent.

The talks made little progress and Ryabkov made it clear he was expecting progress to be difficult. He highlighted that the question of Nato’s expansion to possibly include Ukraine was the central point of the talks and there was no common ground on the issue; however, he stressed that the talks would fail if some sort of deal was not reached.

“We don't expect West to show flexibility on some of our positions. But we have a firm inflexibility on some issues that I tried to explain to our US colleagues where we are. It is not a situation where there are some deal-breakers on some issues. The problem is we have a deep disparity on basic views. There are some issues where there is a co-operation possible but for us we need to find a way to make progress on the issue of no expansion of Nato,” said Ryabkov.

“I expect this is one of the areas where we have the greatest difficulty with the US. They say no way anyone, or Russia, can have a say [on who joins Nato]. But we said its mandatory that Ukraine never, never ever, becomes a member of Nato,” Ryabkov told a select group of invited journalists that included several members of the international press corps.

Ryabkov went on to repeat a suggestion that the wording of the Bucharest summit document that includes an informal invitation to join Nato for Ukraine and Georgia be changed. “We would favour at the forthcoming summit the reform of Bucharest summit memo in 2008 where it says Ukraine and Georgia could be members – that could be changed to say they will never become members. That would be a favourable change.”

“The US withdrawal from the INF treaty created [a] situation that because only because of Russia's unilateral moratorium on deployment [was there] no further deterioration in security situation,” said Ryabkov. “If now Nato deploys capabilities that are now being developed in US and could be deployed in Europe, it would require a military response by Russia through means at our discretion that it would inevitably damage US security.”

Ryabkov is likely referring to a new deployment of intermediate-range missiles inside Russia close to its western borders that would represent an escalation of tensions and a de facto return to Cold War tactics, which has been suggested by analysts as one of the “technical” means that Russia would respond to a failure of the current negotiations.

With these comments Ryabkov is suggesting that Russia and the US would end up in a new arms race. Both sides have been developing a new generation of hypersonic missiles that could negate the effectiveness of the current missile defence arrangements in place, as these missiles travel so fast they could penetrate existing anti-missiles defences before they are activated. Russia has been testing its new hypersonic missiles in the last few months and is intending to put them into service this year.

Ryabkov went on to complain about the US withdrawal from the Open Skies deal that allowed both sides to fly inspection planes over each other’s territory to better track military and hardware deployments. “The end of the Open Skies agreement ended over flights. Over 80% of the coverage is out of reach to this arrangement. Who wins from this? So why not freeze the deployment and why does not Nato roll back to situation 1997. I think it would reinforce security for all nations involved,” said Ryabkov. “This false sensation [of security] would be replaced by a true improvement in real security.”

Russia has specifically proposed restarting the INF treaty, restricting large-scale military exercises near to the borders for both parties, and scaling back deployments to their 1997 levels in an eight-point list  that the Russian Foreign Ministry released in December. On all these issues Ryabkov has suggested there is common ground with the White House. As a senator US President Joe Biden was against the US withdrawal from the Cold War arms deals and from his comments it appears that he is willing to compromise on some of these questions.

But Ryabkov made it clear the hurdle of Ukraine’s membership has to be cleared first.

“We are fed up with loose talk, half-promises, misinterpretations. We need ironclad, waterproof, bulletproof, legally binding guarantees on this issue,not assurances, guarantees with all those words like “shall”, “must” in them, but ironclad guarantees Ukraine will never join,” said Ryabkov, adding that trust between Moscow and Washington has been destroyed, hence the Kremlin’s insistence on a legal deal. “Enough is enough,” added Ryabkov emphatically. “The situation now is dangerous and precarious and we cannot afford any more delays on this very fundamental issue.”

The deputy minister went on to quote Putin, saying the Russian president has said Russia cannot go backwards or back-peddle on the fundamental question of Ukraine joining Nato.

Asked if any progress at all had been made on this issue during the first day of talks, Ryabkov replied: “On the central question of no expansion of Nato – the flat and plain answer is no. No progress was made. This is the main problem. The rest depends on what will happen down the road on exactly this issue.”

“All this leaves us no choice but to strengthen our defences inside our borders,” says Ryabkov. “There are no restrictions in our security treaties on us and our exercises inside Russia. The West does what it wants and we do what we want but we are sticking to all our obligations.”