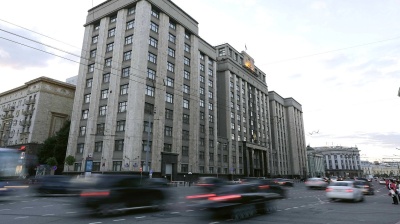 Rather than calling on Putin to recognise Donetsk and Luhansk as independent, the Duma has proposed that various government departments look into the question separately and come up with suggestions. This suggests a willingness to continue diplomatic talks with the West over the Ukraine crisis. / Image: Russian State Duma website.
By Theo Normanton in Moscow February 15, 2022

Russia’s Duma has refrained from calling on President Putin to recognise Luhansk and Donetsk as independent from Ukraine. Instead, it has drawn up an alternative arrangement, giving various government bodies the opportunity to research the question and come up with their own proposals.

Tensions continue to spike on the Russian-Ukrainian border, with some estimates saying that Russia has amassed around 140,000 troops. America has been very vocal about the threat of a Russian invasion, with President Biden going so far as to declare that it will take place on Wednesday 16 February.

But this decision by the Duma suggests a desire on the Russian side to explore diplomatic routes before resorting to a costly war.

That is also the message which came from Russian Foreign Minister Sergei Lavrov in a televised meeting with President Putin today. When asked by Putin if there was any chance of coming to a peaceful agreement with the West, Lavrov replied that diplomacy “has by far not been exhausted”.

Lavrov went on to propose that Russia continue diplomatic efforts, and even “step them up”.

Russia’s demands for de-escalation include Nato ruling out the possibility of Ukraine becoming a member and recognising the principle of indivisible security. Nato appears unwilling to compromise on both points, but has made extensive efforts to find a diplomatic resolution to the crisis.

German Chancellor Olaf Scholz is scheduled to meet Putin on February 15, the latest in a string of Western politicians who have travelled to the Kremlin to discuss Putin’s grievances. For now, it seems, Russia has not given up hope on the possibility that one of these meetings will yield a mutually satisfactory compromise.