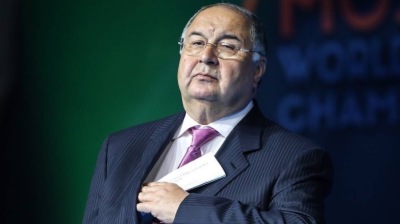 ​Russian oligarch and president of the Olympic fencing committee Alisher Usmanov says competing under the national flag is a right, not a privilege in a letter to the Olympic committee
By Ben Aris in London December 8, 2019

Russian billionaire and president of the International Fencing federation (FIE) Alisher Usmanov weighed into the doping scandal on December 7, sending a letter to the World Anti-Doping Agency (WADA) with a copy to the International Olympic Committee (IOC) saying competing under the national flag is a right, not a privilege.

The committee is due to meet on December 9 and may rule that the Russian flag will be banned from the upcoming games in 2020. Russian athletes will be allowed to compete, but as individuals, not as representatives of their country.

Usmanov appealed to the head of the WADA Craig Reedie to refrain from imposing restrictions on Russian athletes that have passed doping examinations and are due to travel to the games next year.

“I understand the importance of the matters that will be considered on December 9, 2019. I fully support the most severe sanctions against any doping offenders but only if the decisions are fair and based on general principles of law and the Olympic Charter,” Usmanov, a former fencer himself, said in the letter, which was also sent to the IOC president Thomas Bach.

Russia has been caught up in a doping scandal where many athletes were caught using performance enhancing drugs and been banned as a result. However, Usmanov argues that it is not fair to penalise those athletes that have been declared clean and accepted as participants in the games for the crimes of others. In particular, a ban on the use of the national flag is discriminatory, the billionaire argued.

"The ban to fly Russia’s flag is another obvious discrimination because the ability of an athlete to compete under the flag of their country is not a special privilege but the basic human right of any athlete,” Usmanov wrote.

Russia has been accused of using banned drugs to boost its performance at the games, which is a competition where athletes specifically represent their country in competition first and foremost. In other events like the World Championships, athletes compete to prove their individual excellence. Banning the use of the national flag undermines one of the essential elements of competition in the Olympics and is particularly unfair on athletes that have been shown to be clean of any doping abuses, says Usmanov.

“The ruthless fight against doping shall not be turned into lynching and the application of new sanctions for the second time for the same doping violation. While guilty ones must definitely be punished as hard as possible, the innocent ones shall not be deprived of the most important human rights," Usmanov says somewhat hyperbolically.

On November 25, the WADA Compliance Review Committee (CRC) reiterated its previous recommendation for the world anti-doping body’s executive committee to strip the Russian Anti-Doping Agency (RUSADA) of its compliance status and came up with a recommendation of additional sanctions against Russian sports, reports Tass.

Among the recommended sanctions, the CRC suggested to bar Russia from all international sports competitions, including the Olympic and Paralympic Games, for a four-year period. The WADA executive committee will pass a final decision on Russia at its meeting on December 9 in Paris.

Usmanov is a major Russian businessman but is best known for an early investment into Facebook before its IPO that reportedly made him billions of dollars. He is also heavily invested in Russian tech and telecoms companies.