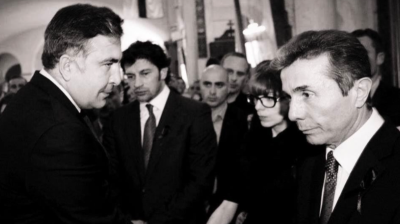 Old foes. Saakashvili (l) and Ivanishvili (r) are seen here in 2012, the year before the former fled Georgia at the end of his second term as president.
By Iulian Ernst in Bucharest October 30, 2020

Going into the election, Georgian Dream leads in most opinion polls. However, there appears to be a substantial number of ‘undecideds’, and none of the painted likely scenarios support an outcome in which it is able to form a new majority alone, while a two-thirds constitutional majority is even more unlikely. Further complicating the picture is the unknown impact on voters' decision-making that will be caused by a stark spike in coronavirus cases in Georgia in recent weeks, a blow to a government perceived to have done so well in managing the first wave of the pandemic.

While not ready to truly unite and form a controlling majority themselves, almost all of the opposition parties and certainly the big players (Saakashvili’s United National Movement, or UNM, and European Georgia) in the country of nearly four million have positioned themselves against Georgian Dream. Thus, finding a junior ruling partner will be nearly impossible for Ivanishvili’s party, a party that has dominated the parliament for the past eight years.

The single-mandate majoritarian MPs and elected lawmakers of smaller parties allowed for the first time in parliament may play a role in the formation of the ruling majority, but it is still unclear as to which side the various MPs would end up on.

Against this background, both Georgian Dream and UNM claim they anticipate winning through at the ballot box. UNM has even announced a rally for Rustaveli Avenue, in front of the parliament, due to kick off immediately after the polling stations close. Saakashvili, having put in online appearances during the final electoral rallies of UNM, wastes no opportunity to speculate on the election outcome amid the uncertainty generated by the more than likely tight results.

Saakashvili warned Ivanishvili—an ex-PM seen by his critics as de facto ruling Georgia from his striking mansion set on a mountain that overlooks the capital—that in the case of the rigging of the election, he would receive “a personal and very strong response”.

"The response will not be withdrawal. The response will be dignity, attack and a very rapid seizure of power by the people. We will personally launch the response in a very strong manner," said Saakashvili, presently a reform taskforce official in Ukraine, who fled Georgia at the end of his second term in 2013, fearing arrest after prosecutors accused him of abusing power.

Given the thick tension, the ground does not seem set for the smooth and orderly formation of a majority in Tbilisi. The role of international observers could prove vital. Given the stakes, international organisations eventually decided to fly in short-term observers, rather than only rely on permanent representatives on the ground as was originally contemplated. The observers’ mission will, however, be hindered by hygiene restrictions brought in to counter the coronavirus (COVID-19) pandemic.

The Delegation of the European Union to Georgia on October 29 announced the dispatch of a European Diplomatic Watch. More than 70 teams will aim to visit over 1,000 polling stations across Georgia during election day.

The election will be conducted under a transitory law, with a revised Constitution awaited. A total of 120 of parliament’s 150 MPs will be elected through proportional party lists, while the other 30 will be elected under single-mandate majority voting. Previously, the ratio was 77 to 73. Another key provision is that there will be no entry threshold for small parties seeking parliamentary representation.  A larger number of small parties are therefore likely to obtain a voice in the chamber.

Some 66 parties have registered to compete for parliamentary seats. A total of 490 candidates will be running in 30 majoritarian districts.