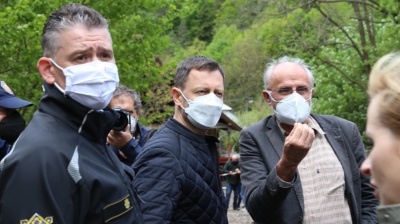 Slovak Agriculture Minister Micovsky inspects flood damage in the village of Rudno nad Hronom before his resignation.
By bne IntelliNews May 26, 2021

Slovak Agriculture Minister Jan Micovsky has announced he will resign from his post on May 31, due to suspicions of corruption at the Slovak Land Fund (SPF), the Slovak News Agency reported.

On May 21, the Special Prosecutor's Office (USP) filed a proposal with the Specialised Criminal Court to launch criminal prosecutions against seven people from the SPF, including its general director, Gabriela Bartosova, who were detained by the National Crime Agency (NAKA) on May 19.

"The situation is that I nominated a person [Bartosova] who probably failed. You can find an expert, but in addition to expertise, you also need a person who is morally capable," the minister stated, quoted by the news agency.

“I accept his decision and express my thanks for the job he's done at the Agriculture Ministry, where he inherited an elaborate system of bribes and undeserved privileges from previous governments. The process of cleansing the ministry will continue, just like the setting of new, fair rules in policies concerning the allocation of subsidies,” said Prime Minister Eduard Heger, who like Micovsky is from the OLaNO party.

According to the Freedom and Solidarity (SaS) MP Jarmila Halgasova, the detentions of several people, including the SPF general director, over suspicions of corruption-related crimes, have put the Slovak Land Fund in a bad light.

“Despite changes in the government, there are suspicions that land-trafficking has continued. The arrest of the agriculture minister's nominee is the first warning sign for the current governing coalition," she stressed, cited by the news agency.

Some opposition politicians argued that Micovsky should have stepped down a long time ago. "The forester Jan Micovsky has left the whole agricultural portfolio in a state of total decay. Farmers and food producers have been on strike alert for eight months and if the government won't approve the state co-financing for the new programming period at 45%, they'll hit the streets,” said MP Robert Puci.

“The protection of Slovak consumers is non-existent, the ministry is laying off the State Veterinary and Food Administration personnel, the number of food checks is the lowest in history and the OLaNO party is going to cut down fines for food chains," he added.

COMMENT: Risk premiums in Central Europe during the COVID era do surprisingly well
Slovak inflation at its highest level since October 2012
GLOBSEC: No debt ratio is safe for small EU countries