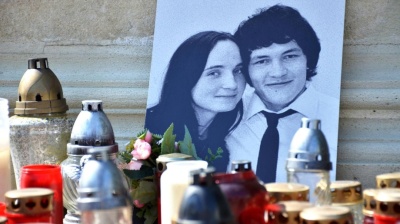 Slovaks commemorated the memory of journalist Jan Kuciak and his fiancée Martina Kusnirova, both murdered two years ago.

Kuciak and his fiancée were assassinated in Kuciak's house at Velka Maca in February 2018. Their murder was unprecedented in the modern history of Slovakia, causing a wave of massive protests in the country and resulting in then Prime Minister and Smer-SD chair Robert Fico stepping down. Fico’s cabinet was replaced by the current PM Peter Pellegrini (also Smer-SD).

Their deaths were honoured by several thousand people and 15 ambassadors, including those from the US, the UK, Germany, France and Canada, on Bratislava’s main square on February 21.

“We remember Jan Kuciak and Martina Kusnirova on this sad day. They died because Jan fought for the truth. More than ever before we have to protect the freedom of the media and battle against corruption,” said the US ambassador to Slovakia Bridget Brink, the Slovak News Agency cited.

“The young people, who were planning a wedding and wanted to spend their lives together, died by the hand of a murderer seeking to silence the truth. If those who ordered the murder thought that their deaths will intimidate other journalists from uncovering scandals, they miscalculated. What Jan Kuciak didn't manage to complete, others will,” said Slovak President Zuzana Caputova, as quoted by the news agency.

In mid-January, a former Slovak soldier, Miroslav Marcek, pleaded guilty in court to the Kuciak’s murder. Three others accused of their murders, Marian Kocner, Alena Zsuzsova and Tomas Szabo, refused to plead guilty.

On Friday at the ceremony, Pellegrini thanked the police and prosecutors for the fact that “the murderers and possible orderers [of the murders] are being tried.” “I feel sorry for the foiled lives of two young people just as I feel sorry for any life ended by violence,” Pellegrini said, adding that only a fair punishment for the murderers and the whole truth about the case can contribute to reconciliation among the public in Slovakia, the news agency quoted.

According to Fico, the murder has been greatly misused for political goals, stressing that the governing coalition demonstrated a high political culture shortly after the murder by making several decisions.

Fico’s party, the senior government party, is poised to win the upcoming general election due on February 29, although the party has remained weakened in aftermath of a political crisis sparked by the Kuciak’s murder.