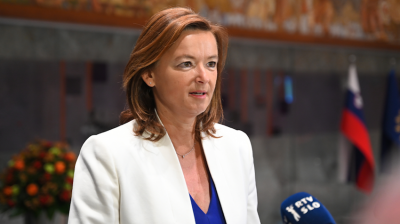 Incoming foreign minister Tanja Fajon says Slovenia's new government is "committed to the rule of law, democracy and freedom of the media". / socialnidemokrati.si
By Valentina Dimitrievska in Skopje May 31, 2022

Tanja Fajon, who will soon take over as Slovenia’s foreign minister, said on May 30 that Ljubljana will realign with the core EU countries, while distancing itself from the Visegrad Group. Fajon underlined that the new government will be committed to the rule of law, democracy and freedom of the media.

Fajon is a leader of the Social Democrats (SD), which will form the new government alongside the Freedom Movement, which won the April general election, and the Left Party. Robert Golob, leader of the green-left Freedom Movement, will head the new government, which is expected to make a decisive break from the policies of outgoing Prime Minister Janez Jansa.

“With my visit to Brussels, I would like to announce that Slovenia belongs to the core of the EU and that we are committed to the rule of law, democracy and freedom of the media. By visiting Berlin, we have close allies there and we want to strengthen relations on the Germany-France-Italy axis,” Fajon said in a POP TV show, according to a tweet posted by her party, the SD.

“The EU will remain at the core of Slovenia's foreign policy, which is particularly important in an era of growing polarisation between democratic and authoritarian regimes,” news agency STA cited her as saying in her presentation to the parliamentary Foreign Policy Committee on May 30, which endorsed her candidacy.

Fajon praised her predecessor, Anze Logar, but said the country's foreign policy had often been overshadowed by Jansa's solo actions and the disputes he had engaged in on Twitter.

Jansa frequently clashed with EU officials during his time in office, which included Slovenia’s six-month stint in the EU Council presidency. Jansa, like fellow right-wing populist politicians in eastern EU members Poland and Hungary, had increasingly challenged the liberal values of the EU on issues such as gay rights and media freedom.

Ljubljana has been strongly criticised by European Commission officials for suspending funding for news agency STA and Jansa’s government also differed with Brussels over other issues such as the nomination of Slovenia’s European prosecutors.

His critics nicknamed him ‘Marshal Tweeto’, a reference to the former Yugoslav leader Marshal Tito and Jansa’s enthusiasm for the micro-blogging platform Twitter.

Regarding relations with Slovenia’s neighbour Croatia, Fajon said she would uphold the commitment that the border arbitration award must be respected, which marks a break with the policy pursued by Jansa’s outgoing government, which put arbitration on the back burner in favour of reaching a diplomatic agreement that would be in the spirit of the arbitral award, STA reported.

According to Fajon, EU enlargement to the Western Balkans is in Slovenia's interest and remains one of the strategic priorities. She also announced the appointment of a special envoy for Western Balkan issues.

She described migrations as an important challenge for the EU underlying that the EU must be capable of protecting its borders.

"We need a comprehensive asylum, migration and integration policy that will facilitate an appropriate response to the pressure of irregular migration and make regulated immigration easier," Fajon said.

Since Russia’s invasion of Ukraine, Jansa was a strong supporter of Kyiv, including advocating for EU candidate status for Ukraine.

Fajon also condemned Russia's invasion of Ukraine "in the strongest terms”, but said that dialogue is the only way out of the crisis.

"Permanent peace and stability in Europe, no matter how remote it may seem at this moment, cannot be achieved without dialogue and without Russia," according to her.

She said Slovenia needed to shift from support of Ukraine in name only to concrete actions by helping mitigate the humanitarian and financial crisis in Ukraine and participating in preparations for the post-conflict restoration of the country.

As for transatlantic relations, Fajon said they remained "the backbone of Europe's security architecture".

"Membership of Nato is the basis on which to upgrade relations and strategic dialogue with the United States, which are very important for us," she said, adding that the Western Balkans was an area of shared interest where Slovenia is recognised by the US as "an expert and a partner”.

Fajon also mentioned relations with China saying that Slovenia's policy will abide by the one-China principle while strengthening relations with Taipei.

She said Asia held great potential for Slovenian business and relations with India should be deepened.