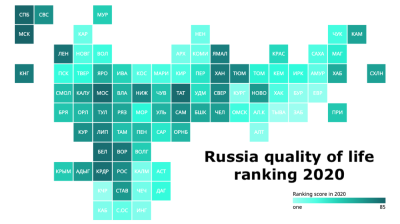 Life has improved in about a third of Russia's regions and the most successful are attracting their residents home again after they had left for Moscow, where wages are six times higher.
By Ben Aris in Berlin March 10, 2021

For two decades it used to be said that there were two Russias: Moscow and everywhere else. The difference between the quality of life in Russia’s capital and in the other 84 far flung regions was enormous.

In 2020, the quality of life in most Russian regions remained practically unchanged, according to a quality of life survey carried out by the state news agency Ria Novosti.

The rating found that the best places to live, as in the previous year, remain Moscow, St. Petersburg and the Moscow region, which comes as no surprise, and they have scores of over 80,000 out of a possible total index score of 85,000

In the second tier, with scores of over 60,000, are many familiar names, led by Kazan in the Republic of Tatarstan, Belgorod near the Ukrainian border, Krasnodar in the balmy southern part of the country, Leningrad that surrounds St Petersburg, the agricultural powerhouse of Voronezh in the black earth regions and the oil-rich West Siberian Khanty-Mansi Autonomous Okrug as the only comfortable region that is not in the European part of Russia.

Right at the very bottom of the list are the regions in very depths of Russia grouped around Lake Baikal, although Irkutsk, the capital of the Siberian region, is a lot better off, ranked at 55 in the list with a score of 41,786.

The other regions in this neck of the woods are far poorer. All of Tuva, Altai Republic, Transbaikal and the Republic of Buryatia near the Mongolian border have scores of under 30,000 and are the poorest in the Federation. The Jewish Autonomous Region in Russia’s Far Eastern interior also stands out as especially poor with a score 28,118 and used to be a favourite end station for internal exiles.

The next group up from the bottom of the ranking contains several regions from the Caucasus, with Karachay-Cherkess Republic as the very poorest with a score of 27,693, according to Ria Novosti. But the group of regions with a score between 30,000 and 40,000 is also scattered over the hinterland east of the Ural mountains. Chechnya is also in this group but does better than many of its neighbours, ranked at 74 with a score of 36,754.

The old duality of “good in Moscow, bad elsewhere” doesn't work as well as it used to. After three decades many of the regions have been investing into local infrastructure and services and the standard of living has improved dramatically.

Other regions offer a much easier life due to their climate. On a trip to Norilsk on the coast in Russia’s Far North, local pensioners told bne IntelliNews their dream was to buy a small dacha in Bryansk on the Ukrainian border, as the weather was pleasant and they could live almost all year round from produce from the garden.

Incomes in the capital remain as much as six times higher than in the Caucasus and are on a par with most western European cities, but the cost of living is also extremely high. In somewhere like Brayansk the cost of living is so low residents have comfortable lives with much less evening out the pay difference gradient.

But income inequality remains a major problem, as does the differential in wages between the cities in the European part of the country (to the west of the Ural mountains) and the rest of the country. However, things are starting to change.

As bne IntelliNews reported two years ago, the average wages in most of Russia’s regions remain well behind the national average, but the wage distribution is distorted by the high wages in resource production mono-cities in the deep interior of the country. In a 2018 regional wage survey for three regions – Chukotka, Yamalo-Nenets and Nenets – all had higher average wages than Moscow. The latter two regions are both huge but remote gas producing regions and the reason why Chukotka's average wage was so high was because oligarch Roman Abramovich was a registered resident and paid his income tax there.

These cities are mostly raw material producers with no connection to the road or rail networks and so have to have everything flown in. The wages are high, but so is the cost of living. 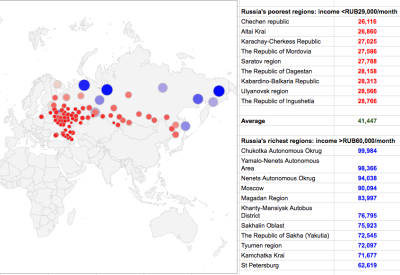 Net-net the quality of life in some of the regional cities has risen to the point where they are starting to compete with Moscow and seeing reverse migration.

The cities of Sochi and Krasnodar, to name two prominent examples, have seen their populations explode dramatically in recent years and are experiencing reverse migration – particularly by families with small children. The basic services of school, hospitals and affordable housing mean life is more pleasant than in the megalopolis of Moscow, and with firms increasingly moving production into regional cities where the costs are lower, there is plenty of work. For example, Kazan has become the call-centre hub for the whole of the Federation. Likewise, the rapid growth of e-commerce has been driving a groundswell of light industrial manufacturers catering to the domestic consumer market after rising incomes in China have started to price its consumer goods out of the market in comparison to cheaper Russian alternatives.

About a third of Russia’s regions are now prospering, and have been helped by the government’s policy of heavy investment into regional infrastructure development.

The Sochi Olympics were widely derided as the “most expensive Olympics in history” after the government poured some $50bn into the preparations for the games – about ten-times more than is usually invested by the host country. But what critics missed is that the bill was not so high because of all the stealing (although there was plenty of that) but because the city’s entire infrastructure was overhauled: new airports, conference centres, modern housing, power and sewage – everything was upgraded. And the population of Sochi has more than doubled since.

The decision to host the World Cup was more of the same, except another 11 key region cities got the same treatment and they all feature well in the Ria Novosti ranking.

In parallel to the state investment is the growing inter-regional competition for domestic investment. A few regions, like Kaluga, spent very heavily on setting up industrial parks and as result attracted big investments from domestic investors. Kaluga became the “Detroit of Russia”, attracting most of the main car manufacturers from a standing start with its fully developed “plug and play” $1bn industrial park.

Elections and the fall in popularity of the ruling United Russia Party have helped too. The Kremlin has increasingly been forced to turn to the regional governors to help bring in the vote as the centre is powerless to sway the vote in the regions by itself. That has meant giving regional governors the money to make investments into local infrastructure and services, which has seen their popularity soar: last year Russia’s regional governors briefly saw their popularity overtake that of Russian President Vladimir Putin, who has enjoyed a 65% approval rating for pretty much all of his career as president.

The bottom line is life is still hard in Russia’s frozen interior. The World Bank has recommended several times that these cities and towns be simply closed down and the people relocated to the nicer parts of Russia, as many of these settlements no longer make economic sense. What stops it happening is the value of an apartment in Norilsk is so low the locals cannot raise enough money to buy a dacha in Bryansk. The local pensioners are trapped by the property price differential. Younger people don't have this problem and so the interior is depopulating slowly, but it will take several generations for the rebalancing process to be complete.

Online vendors of goods got a pandemic boost in Bulgaria, but when the lockdowns were lifted, many people simply went back to the shops.

In countries like Montenegro, more and more tourists have decided to venture inland and swap the comfort of seaside hotel beds for old wooden huts, also known as “katuns”, used in the past by nomadic herders, writes the EBRD.

Two new papers find that Georgia and Azerbaijan would gain more from improving trade with their neighbours than pursing a place on the Belt and Road.

Russia has been accused of cutting gas supplies to Europe to force the EU to certify its new Nord Stream 2 pipeline, but most of the record-breaking prices can be explained by steep V-shaped market forces and ageing fields and pipelines.

Russia’s retailed equity boom is gathering momentum and it is, like elsewhere, increasingly being driven by social media, according to a survey carried out by VTB Capital called “To the moon: Scoring social stock sentiment."

A pandemic boost but challenges to overcome for Bulgaria’s online retailers
6 hours ago
Montenegro: The agritourism boom
10 hours ago
Quantifying the Caucasus’ gains from BRI trade
15 hours ago
LONG READ: How a V-shaped market and ageing pipes and fields sent gas prices soaring
1 day ago
Russian retail investors “shoot the moon” using social media to pick stocks
2 days ago