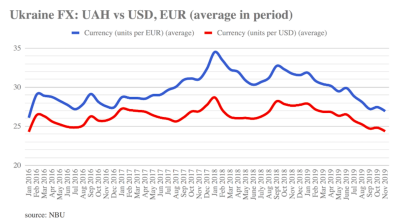 Ukraine hryvnia has gained 15% to the dollar this year and its strength is causing problems for exporters
By bne IntelliNews November 28, 2019

Ukraine’s hryvnia has gained 15% in value YTD and that is causing problems for the export orientated economy. The hryvnia passed the UAH24 to the dollar mark on November 27, a level it hasn't seen since 2015.

Ukrainian President Volodymyr Zelenskiy met with representatives of the National Bank of Ukraine (NBU) on November 28 to discuss policy.  Oleksiy Danilov, head of Ukraine’s National Security and Defence Council, was also invited to the meeting, according to Bloomberg sources.

The strengthening of the currency has been a boon for the central bank in its battle to bring down inflation. Consumer price inflation (CPI) has fallen steadily from over 20% in 2016 and higher in the crisis years of 2014-15, but was down to 6.5% in October after falling a whole percentage point in the last month.

That has allowed the NBU to end the tightening policy it was running last year and cut rates several times this year. The NBU slashed its key policy rate by lopping off a whole percentage point to bring the rate to a still very high 15.5% per annum on October 25.

However, the strong currency has impaired exports, especially in the metallurgical sector, one of Ukraine’s strong suits, which was already suffering from falling prices of iron and steel this year. Agricultural exports, which have grown to become a major export commodity, have also been affected.

Until now the central bank has resisted demands to intervene by buying foreign currency more actively, citing adherence to its policy of maintaining a flexible exchange rate. But the bank is under increasing pressure to loosen its fight against inflation and weaken the currency for the sake of growth and exports.

In particular the NBU has been criticised by oligarch Igor Kolomoisky, who also owns major metallurgical businesses. The NBU issued its strongest statement yet on November 26 accusing Kolomoisky of launching a coordinated campaign of terror, intimidation and physical attacks on both the bank’s staff and its independence.

The International Monetary Fund has made it clear that central bank independence is key precondition for any new Extended Fund Facility (EFF) deal that would be worth about $5bn to Ukraine.

This article is from bne IntelliNews' Ukraine monthly country report. Sign up to receive the report to your inbox each month, covering the slow moving macro- and micro-economic trends, the major political news and a round-up of the main sectors and corporate news. The first month is free and you can unsubscribe at any time.

Or ask bne IntelliNews’ Stephen Vanson for a trial and corporate packages.