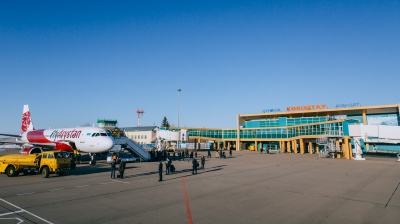 FlyArtystan is based in Kazakhstan's commercial capital Almaty.
By Kanat Shaku in Almaty January 14, 2021

Kazakhstan’s only lowcost carrier, Air Astana subsidiary FlyArystan, carried 1.5mn passengers in 2020 bringing its total number of passengers flown since the airline's launch in May 2019 to 2.2mn, FlyArystan said in a statement.

The growth in passengers carried was likely supported by higher local demand for low-cost flights amid the economic crisis caused by the ongoing pandemic—more than half of FlyArystan’s one-way tickets were sold at under $23.

FlyArystan doubled its fleet of Airbus A320s to seven planes in 2020 and expanded its operations to 28 routes between 14 destinations within Kazakhstan. It plans to expand further to 10 aircraft within the first half of 2021.

In 2021, FlyArystan plans to add three aircraft to its fleet and launch at least 14 new routes with the goal of deploying low fares to double its achieved 2020 passenger volume, the airline said.

“That was a difficult year for many, which changed our reality and our everyday routines. But along with that 2020 brought many positive changes. We launched a mobile app that will make air travel easier for our customers, we flew to Turkestan [region] for the first time, and through expanding our fleet we made even more seats available for our lowest fares,” FlyArystan’s CCO Zhanar Zhailauova said.

The airline was launched in 2018 to operate a “classic LCC [lowcost carrier] model” led by British-Australian national Tim Jordan, who gained over 15 years of experience in senior LCC management at Cebu Pacific and Virgin Blue.

The initial and ongoing objective of FlyArystan is to increase domestic connectivity, though Air Astana hopes to eventually expand the LCC’s regional and international links as well.

Most Kazakhs among Kazakhstan’s population of 18.3mn cannot afford to take flights to travel between different parts of their country—the ninth largest in the world at 2,724,900 square kilometres (1,052,100 square miles)—and so often resort to using train services instead. Travelling between certain Kazakh cities can take more than a few days. FlyArystan’s growth, therefore, has been largely influenced by its affordable nature.